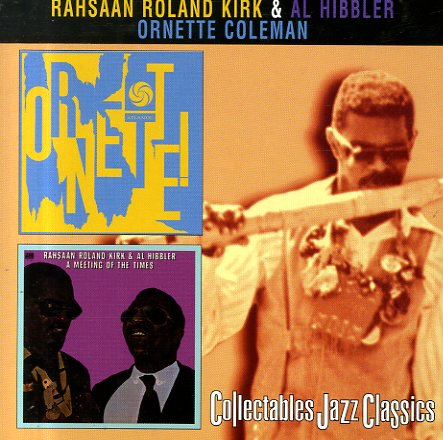 Certainly one of the strangest 2-fer CDs we've ever seen! The release pairs one of Rashaan Roland Kirk's later albums for Atlantic with a classic release by Ornette – and both of the records are quite different from each other. The Ornette's worth the price of the CD alone – as it features some of his best Atlantic work, recorded in a firey session with Don Cherry, Ed Blackwell, and the great bassist Scott LaFaro! Titles on that one are very long – and include "RPDD", "C & D", and "WRU". The Kirk album isn't nearly as memorable – and features Rashaan backing up vocalist Al Hibbler in a set of mellow Ellingtonian jazz vocal tracks. Titles on that one include "Dream", "Daybreak", and "Carney & Begarnd Place".  © 1996-2021, Dusty Groove, Inc.
(Out of print.)

Stitt Plays Bird (with bonus tracks)
Atlantic, 1963. Used
CD...$4.99
After years of staying free of comparisons with Charlie Parker, Sonny Stitt steps confidently into a set of compositions by the late, great one – sounding really wonderful in his own interpretations of these classics! The album's got the same simple and focused still as Stitt's best work on ... CD

Blues For Mister Jimmy
Collectables, Mid 60s. Used
CD...$9.99
Classic hard-wailing organ from Jimmy, and one of his best sessions from the mid 60's Sue Records years! Most of the cuts are short, with the deep R&B groove that made his best Sue records really work – and they were recorded with a good raw sound that would be best pounding out of a ... CD

Deuces Wild
Atlantic/Collectables, 1967. Used
CD...$8.99
A great little Sonny Stitt album – very different than any of his other sets from the 60s! The album has a number of interesting aspects – from hard-wailing organ by Wilmer Mosby (who we think is Don Patterson under a fake name), to some screaming guest work by Rufus Harley and Robin ... CD