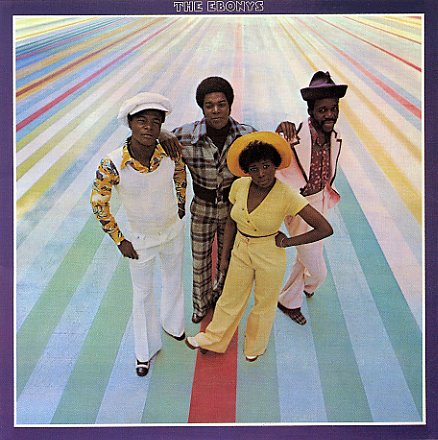 Excellent work by this oft-overlooked east coast harmony group! Like a rare few groups at the time, The Ebonys had a sound that mixed male and female harmonies – in a sweetly mellow sound that was a lot hipper than more famous groups that used the style, and which had all the best elements of the Philly group approach of the early 70s. The set features some great tracks by Gamble & Huff – plus the group's incredible tune "Life In The Country" – a slow mellow stepper that never gets old! Other tracks include "It's Forever", "Hook Up & Get Down", "I Believe", "Sexy Ways", "Nation Time", and "You're The Reason Why".  © 1996-2023, Dusty Groove, Inc.
(Original pressing. Cover has some staining and waviness from moisture, an unglued bottom seam, some peeling along the opening, lightly bent corners and a name in pen on the front, back and labels.)

Family Reunion
Philadelphia International, 1975. Very Good+ Gatefold
LP...$19.99
A great sense of righteousness and groove – the key mix that made the O'Jays so great back in the day – and which really helped put the Philly International enterprise on the map! The album's miles from the group's simple harmony soul roots – even though those were pretty darn ... LP, Vinyl record album

Throw Down
Lifesong/CBS, 1978. Near Mint-
LP...$16.99
The group's second album – with a few tracks still produced by Eugene McDaniels, and the rest handled by Cashman & West. Titles include "Wanna Dance", "The Prophet", "Stayed Away Too Long", "Throw Down", and "Telephone". LP, Vinyl record album

Philadelphia Classics
Philadelphia International, Mid 70s. Very Good+ 2LP Gatefold
LP...$9.99
A classic collection of hits from Philly International – issued at the height of the label's popularity, and featuring some of the biggest tracks from the years 1973 to 1975! Titles include "I'll Always Love My Mama" by The Intruders, "Love Train" by The O'Jays, "Dirt ... LP, Vinyl record album

Voyager
Philadelphia International, 1978. Very Good+
LP...$11.99
Dexter Wansel keeps up the space jazz funk groove that was begun on Life On Mars – with those fat, thumping bass lines, elastic lead guitar, atmospheric soul vocals and loads and loads of keys – spatial work on Rhodes, Moogs and ARPs! It's all done in a funky style not always heard on ... LP, Vinyl record album