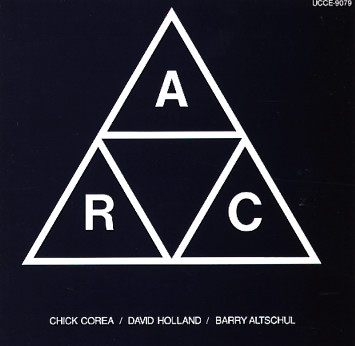 Some of the most outside work ever recorded by Chick Corea – a great session from the post-Circle trio that included Barry Altschul on percussion and Dave Holland on bass! The sound here is in a vast space of dark corners, sharp edges, and some slightly warmer moments – similar to some of Chick's other work as a leader before this album, but a bit more stark overall. Although listed with writing credits, most titles have a strongly improvised feel – quite free, especially the piano parts! Titles include "Ballad For Tillie", "Nefertitti", "Vedana", "Thanatos", and "Games".  © 1996-2021, Dusty Groove, Inc.
(Cover has light wear.)

Tribute
ECM, 1975. Near Mint-
LP...$34.99 (CD...$10.99)
A great statement as a leader from drummer Paul Motian – a player that none would have expected to be hitting this territory in the decade before – the start of a great run of records that continued his break from more familiar rhythmic territory! The record's got a very strong ECM ... LP, Vinyl record album

Solo Concert
ECM, 1980. Very Good
LP...$4.99
A set that's exactly what it promises in the title – a solo set from guitarist Ralph Towner – but also a record that stands as a perfect demonstration of all the really special elements that Towner brings to his sound! Ralph plays both classical and 12 string guitar on the record ... LP, Vinyl record album