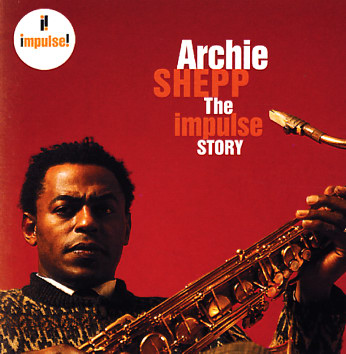 Some of the best work that Archie Shepp ever recorded – an assortment of the best tracks from his classic albums on Impulse Records from the 60s, served up in a really great collection! The package leans a bit more heavily on Shepp's initial small group recordings for the label, and tends to overlook some of the larger group, more soul-based sides for Impulse – but we can more than forgive it for that fact, given that it selects some of the best numbers from records like Fire Music, Four For Trane, New Thing At Newport, and The Way Ahead. Titles include "Naima", "Los Olvidados", "Girl From Ipanema", "Malcolm Malcom Semper Malcolm", "Scag", "Le Matin Des Noires", "Mama Too Tight", and "Damn If I Know" – plus the classic groover "Attica Blues", from Shepp's later Impulse years.  © 1996-2021, Dusty Groove, Inc.
(Out of print, small cutout hole through case.)

Montreux One
Arista Freedom/DA Music (Germany), 1975. Used
CD...$9.99
Great live material from Shepp – not out or crazy, but also not spiritual or hippy dippy, either. The record's kind of a perfectly soulful straight ahead set – in a mode that hints at the traditional direction Shepp would take at the time, but with a lot more interesting moments. The ... CD