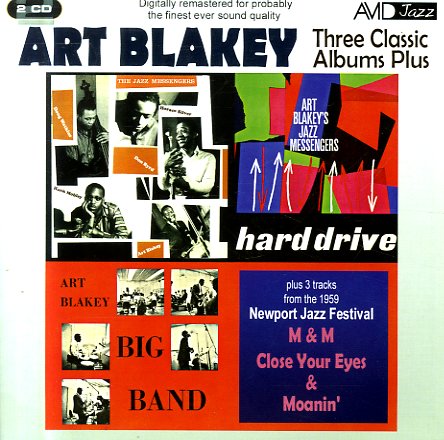 Big Beat (RVG remaster edition)
Blue Note, 1960. Used
CD...$16.99 (LP...$58.99, CD...$11.99)
One of the greatest Art Blakey Blue Note sessions of all time – and perhaps one of the greatest to realize the genius of the Jazz Messengers lineup that included Lee Morgan on trumpet, Wayne Shorter on tenor, and Bobby Timmons on piano! The trio of young talents are at the height of their ... CD

Art Blakey & His Jazz Messengers 1957 – Second Edition – Featuring Johnny Griffin
Bluebird, 1957. Used
CD...$9.99 12.99
Rare RCA work from Art Blakey – tracks from the Lerner & Lowe album, plus other 1957 material too! The core set is based on the music of Alan Jay Lerner and Frederick Loewe – composers usually associated with the Broadway stage, brought into a whole new light here by the late 50s ... CD

Big Beat
Blue Note, 1960. Used
CD...$11.99 (LP...$58.99, CD...$16.99)
One of the greatest Art Blakey Blue Note sessions of all time – and perhaps one of the greatest to realize the genius of the Jazz Messengers lineup that included Lee Morgan on trumpet, Wayne Shorter on tenor, and Bobby Timmons on piano! The trio of young talents are at the height of their ... CD

Live – Olympia 13 May 1961 Part 1
Trema/Sony (France), 1961. Used
CD...$13.99
Excellent lost live work by Art Blakey – playing here with one of the best-ever versions of the Jazz Messengers! The frontline is held down by Wayne Shorter, Bobby Timmons, and Lee Morgan – the firey trio who put Blakey's group on the map as one of the best-ever hardbop ensembles of ... CD