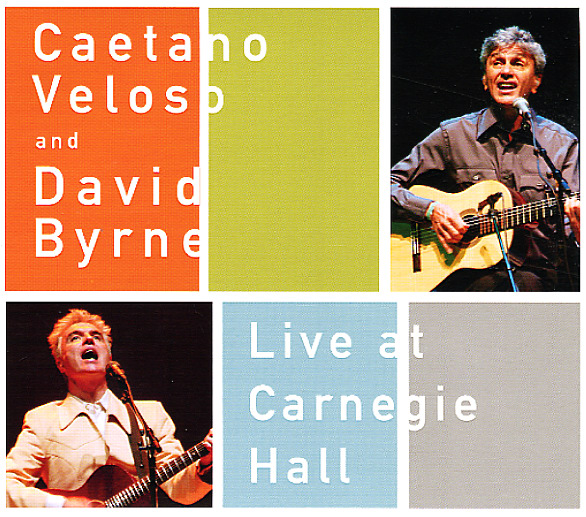 A legendary pairing of two amazing artists – a once-in-a-lifetime performance from Caetano Veloso and David Byrne (and we don't mean that as a Talking Heads pun, either!) The album's got a stripped-down, acoustic feel that really lets both singers open up and dominate the proceedings – Caetano at first, in a presentation of some of his own songs – then Byrne on some of his music – all in an instrumental setting that features guitars from both singers, plus cello from Jacques Morelenbaum, and percussion from Mauro Refosco – starting from gentle spareness to more focused energy, a bit like the style used by Byrne in Stop Making Sense, yet still acoustic overall. The singers come together as the set moves on – clearly comfortable in a warm friendship – and titles include "Sampa", "Coracao Vagabundo", "Mahata", "The Revolution", "And She Was", "She Only Sleeps", "Life During Wartime", "Road To Nowhere", "Um Canto De Afoxe Para Bloco De Ile", "Terra", "Nothing But Flowers", and "Heaven".  © 1996-2023, Dusty Groove, Inc.
(Mark through barcode.)

Live At The Blue Note
Concord, 2002. Used
CD...$2.99
A stunning live set from Tania Maria – recorded with her Viva Brazil combo in a mode that's very similar to her classic recordings from 70s France! The sound here is great – Tania on keyboards and vocals, with backing only from bass, drums, and percussion – a spare framework that ... CD

Return Of Tom Ze – Hips Of Tradition – Brazil Classics 5
Luaka Bop, 1992. Used
CD...$1.99
A great return for the legendary Tom Ze – an artist who'd been brought back to prominence via the efforts of a Luaka Bop compilation – then given this great chance to record for the label on his own! The set's a great return to form for Ze – who sprung from this moment into a ... CD

Garota De Ipanema
Philips (Brazil), 1989. Used
CD...$6.99
A beautifully understated album from the legendary Nara Leao – done as a tribute to the bossa generation, with key help from the great Roberto Menescal – who handles the arrangements, plays guitar behind Nara's lovely vocals! Given that Nara's groundbreaking work of the late 60s was ... CD

Voice I Love (The Face I Love/Music Of Mr Jobim)
Elenco/El (UK), 1965/1966. Used
CD...$19.99
2 rare albums from Brazilian singer Sylvia Telles – both of which feature lyrics in English! First up is The Face I Love – a set that's similar to some of the American bossa sessions on the time at Verve – but which was recorded as part of the original Elenco series in Rio in the ... CD

Fading Yellow Vol 3 - 22 Shiny Jewels Of US Pop-Sike & Other Delights 1965 to 69
Flower Machine, Late 60s. Used
CD...$14.99
22 songs from Eddie Hodges, Michael & The Trees, The Wiggs Of 1666, The Giant Jellybean Copout, The Network, Saturday's Photograph, Mark Radice, The Voyage, River Deep, The Springfield Rifle, The Lamp Of Childhood, The Trolley, and more. CD