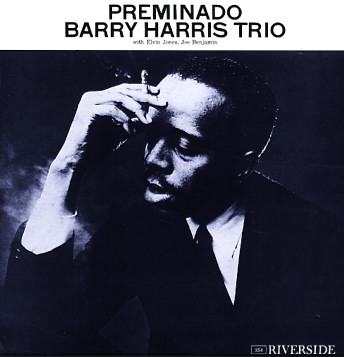 An album that's as evocative as its title – one that features a young Barry Harris stepping out with the kind of sound that first got him noticed right away! There's a bit of a bop influence in the way he hits the keys on the set, but the overall approach is often more lyrically soulful – round and warm, but never too sleepy – and always ready to stop a minute for thought, then leap forward strongly after a bit of brief consideration. The trio here features Joe Benjamin on bass and Elvin Jones on drums – and titles include the originals "Preminado", "Play Carol Play", and "One Down" – plus versions of "Talk Of The Town" and "My Heart Stood Still".  © 1996-2021, Dusty Groove, Inc.
(Out of print.)

Gettin' Together
Jazzland/OJC, 1960. Used
CD...$8.99
Hard edged jazz stuff, featuring the great tenorist in a spare (and rare) setting away from Duke Ellington's band. Wynton Kelly, Jimmy Cobb, Nat Adderley, and Sam Jones lay down a nice soulful groove with a deep bottom, and Gonsalves plays with warmth and imagination throughout. The set includes ... CD

Blue Odyssey
Prestige/OJC, 1968. Used
CD...$11.99
An excellent Houston Person set from the late 60s – and a record that's unlike any other that he did at the time! The groove here is a bit less funky, and a bit more conceptual – kind of a soaring vibe that's still quite soulful, but in less of the stock soul jazz mode that Person was ... CD