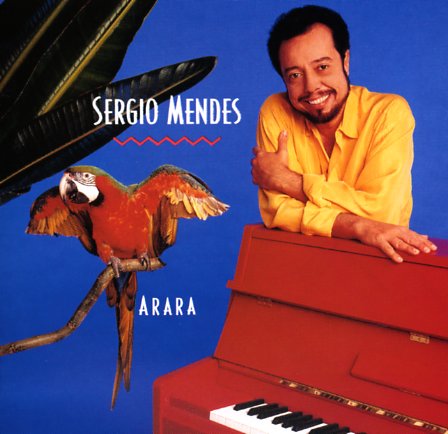 There's a parrot on the cover, and the album's got a slightly more Brazilian feel than some of Sergio Mendes' other albums of the 80s – almost a return to the mix of soul and bossa grooves that Mendes was cutting back in the early part of the 70s! Brazilian influences abound here – not just in the rhythms and instrumentation, but also in the songwriting – which is done by Jorge Ben, Ivan Lins, Gilberto Gil, and Dori Caymmi. Vocals are also in an older Mendes mode too – not entirely the style of the Brasil 66 years, but often compressed together sweetly in a really great way. Singers include Siedah Garrett, Anna Della Espriella, Maxie Anderson, Gracinha Leporace, Angie Jaree, and others – and titles include "Surrender", "Balafon", "Cinnamon & Clove", "Nightlife", "Some Morning", "Mas Que Nada", "Sarara", "Toucan's Dance", and "The Island".  © 1996-2022, Dusty Groove, Inc.
(Out of print.)

Primal Roots
A&M (Japan), 1972. Used
CD...$26.99 (LP...$7.99)
A really unique little album from Sergio Mendes and Brasil 77 – one that's in a much more rootsy style than any of his other work! The "primal roots" here are taken seriously, and like some of his other contemporaries in Brazilian music, Sergio's looking back a bit, and towards a ... CD

Equinox (LP sleeve edition)
A&M/Verve, 1967. Used
CD...$14.99
The second album by Sergio and crew – and a real push forward for the group! The basic format of two-female harmony leads is still in place – but for some reason, this album gives a bit more of a nod to Brazilian roots than before, and really spices things up with an even more ... CD

Look Around
A&M, 1967. Used
CD...$9.99 (LP...$16.99)
Dreamy bossa pop from the A&M studios of the 60s – the Brasil 66 sound at its best! The style here is a perfect blend of real Brazilian influences and some of the hipper styles bubbling in the LA studio scene of the time – all locked together perfectly by Sergio Mendes, in the twin- ... CD