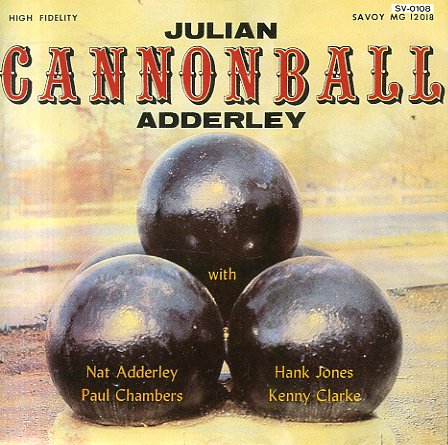 One of Cannonball Adderley's first albums – recorded for Savoy way back in 1955, and done with a free and open style that's a nice contrast to his tighter sides for Mercury! The album's very relaxed – that hardbop blowing session mode that Savoy virtually pioneered – letting the players open up in comfortable studio space, working together almost as they would on a hip live date. Cannon's in the lead on alto, and the group also features Nat Adderley on cornet, Hank Jones on piano, Paul Chambers on bass, and Kenny Clarke on drums – a classic Savoy rhythm section for the two horn players. Tracks are long, and titles include "Spontaneous Combustion", "Still Talkin To Ya", "Caribbean Cutie", and "A Little Taste".  © 1996-2022, Dusty Groove, Inc.
(Japanese pressing, with obi, still in shrink – SOPU 21.)

Cannonball Adderley Live!
Capitol, 1964. Near Mint-
LP...$11.99
Cannonball Adderley with David Axelrod production – a combination that couldn't miss back in the 60s! In keeping with the success of the Mercy Mercy Mercy album done with Axelrod, Capitol did everything they could to catch Cannonball in a live setting – a great move, given the open, ... LP, Vinyl record album

Bird – Savoy Recordings Master Takes
Savoy, Mid 40s. Near Mint- 2LP Gatefold
LP...$13.99
A nicely distilled collection pulled together for issue in the mid 70s, of Charlie Parker's work for Savoy Records – done between the years 1944-1948, with some of the best talents in the bop business! Some of the other Savoy Parker sets have been a bit too overstuffed with alternate takes ... LP, Vinyl record album

Hunt
Savoy, 1947. Near Mint- 2LP Gatefold
LP...$4.99
A rarity from the bop era – hard-blowing tracks that run for a duration that's way longer than the standard three minutes of most 78rpm singles. Here, Gordon and Gray blow head to head in some of their famous "battle" sessions – working with players like Sonny Criss, Howard ... LP, Vinyl record album