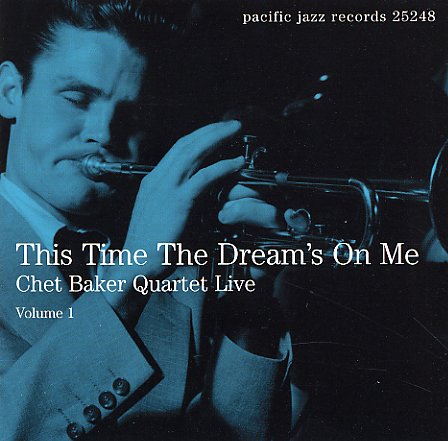 Excellent lost jazz work from Chet Baker! The CD combines 5 tracks from a never-before-heard live set recorded in 1953 at the Curran Theatre in LA, plus 9 more cuts from 1954 session that was issued on the long out-of-print LP Jazz At Ann Arbor. Both sessions feature Chet playing with pianist Russ Freeman, an amazingly understated player whose graceful darkness perfectly matches young Chet's sound on the trumpet. The pair are backed by Carson Smith on bass and either Larry Bunker or Bob Neel on drums – and the extended set's a wonderfully no-nonsense batch of jazz tunes that really sparkles in comparison with some of Baker's later live work. Titles include "All The Things You Are", "Maid In Mexico", "Lover Man", "My Funny Valentine", "Stella By Starlight", and "Russ Job".  © 1996-2022, Dusty Groove, Inc.
(Out of print.)

Chet – Ballads By Chet Baker (with bonus track)
Riverside/OJC, 1959. Used
CD...$4.99 (CD...$5.99)
One of a handful of late 50s albums that Chet Baker recorded for Riverside – all of which are some of his last great 50s work in the studio, before a shift in the 60s to a wider-ranging approach to his music! The style here is definitely in the "classic" Baker mode set down for ... CD

Chet – Ballads By Chet Baker (plus bonus track) (Keepnews collection)
Riverside, 1959. Used
CD...$5.99 (CD...$4.99)
One of a handful of late 50s albums that Chet Baker recorded for Riverside – all of which are some of his last great 50s work in the studio, before a shift in the 60s to a wider-ranging approach to his music! The style here is definitely in the "classic" Baker mode set down for ... CD

Jazz Crusaders Live At The Lighthouse '68 (plus bonus tracks)
Pacific Jazz/EMI, 1967. Used
CD...$9.99
One of the Jazz Crusaders many fantastic live sets from The Lighthouse – just about all of which are excellent, but '68 is a real standout! Perhaps the single feature that pushes this set above and beyond the others, is the beautiful longer tracks – ones have a spiritual soulful vibe ... CD

Matador (Jazz Heritage pressing)
Blue Note/Jazz Heritage, 1965. Used
CD...$6.99
A fantastic mid 60s album from Grant Green – but one that never got its due originally, because it was unreleased at the time – and didn't come out until a Japanese version in the late 70s! Despite that oddly long gap, Matador is truly one Grant's best ever records – a really ... CD