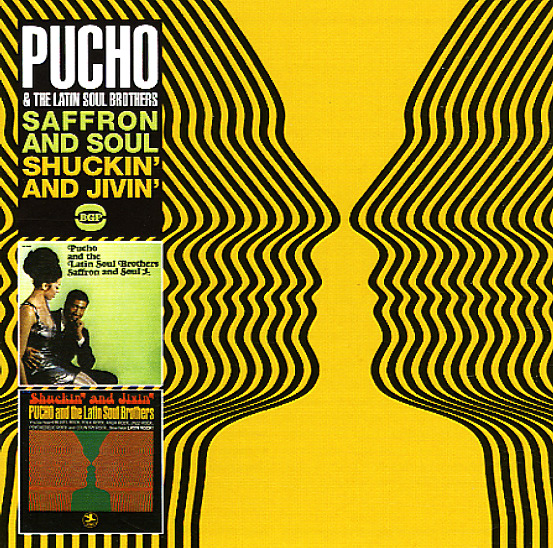 A double-header to die for – two of the rarest albums from Pucho & The Latin Soul Brothers – back to back on a single CD! First up is Saffron & Soul – one of the first albums from the legendary Pucho & The Latin Soul Brothers – a wonderful little record that evenly blends together jazz, Latin, and soul music! There's a stronger soul jazz vibe here than on some later Pucho sets – partly due to the strong use of jazz in the rhythms, but also to the record's excellent horn work – not by the Pazant Brothers, but by Harold Alexander on tenor and flute, Claude Bartee on tenor, and Vicent McEwan on trumpet – all players who really make the record sparkle! The set's heavy on vibes too – a Pucho trademark, played here by Willie Bivins – and titles include the excellent "Soul Yamie", plus "Something Black", "The Groover", "Caravan", "Aye Ma Ma", and "What A Piece". Shuckin & Jivin is one of the most soulful albums ever recorded by Pucho & The Latin Soul Brothers – a set that really shows the changing sound of Latin music in the late 60s – with some fresh vocals added to the group by Jackie Soul! Jackie only sings on a few cuts, but really brings in a raw Spanish Harlem vibe – one that gives the set a bit more of a Fania/Cotique sort of groove than usual – even when the group are leaping ahead on tight instrumentals – tunes that really sparkle with piano from Neal Creque, vibes from Willy Bivens, and tenor sax from Claude Bartee! Vocal gems include "Shuckin & Jivin", "CC Rider", and "You Are My Sunshine" – instrumental tracks include "Return To Me", "Swing Thing", "Maiden Voyage", and "How Insensitive".  © 1996-2023, Dusty Groove, Inc.