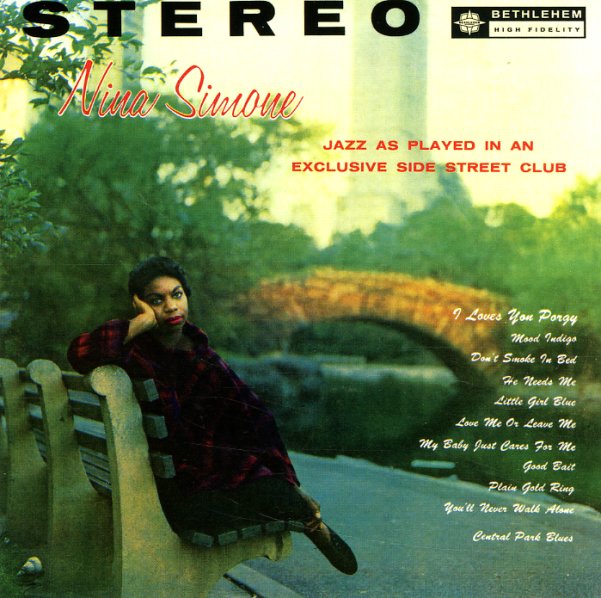 A classic set of early jazz recordings by Nina Simone – one of her first albums ever, but already with an approach that's quite different from other singers of the time! Nina's singing a fair bit of standards here, but she brings a deeply personal approach to the material – inflecting the tunes with gospel-inspired soul, and showing some very slight folksy touches – of the sort that would come in more heavily on later records, but which is already shining pretty strongly here! Nina accompanies herself on some mighty soulful piano – with bass from Jimmy Bond and drums from Al Heath – on titles that include "Plain Gold Ring", "Good Bait", "He Needs Me", "Don't Smoke In Bed", and "I Loves You Porgy". CD features 3 bonus tracks, including the excellent groover "African Mailman" – plus "He's Got The Whole World In His Hands" and "For All We Know".  © 1996-2022, Dusty Groove, Inc.

Forbidden Fruit
Colpix/Warner (Japan), 1961. Used
CD...$24.99 29.99 (LP...$24.99)
A classic album from Nina Simone's early period! The tracks feature prime work from Nina, caught at the point when she was turning her style from straight jazz into more of a folk-inspired soulful sound – filled with power, anger, and sheer raw emotion – played by a small combo of ... CD

Baltimore
CTI/Legacy, 1978. Used
CD...$4.99
A real standout 70s set from Nina Simone – a one-off date for CTI Records, done with a sound that's different than her earlier work for RCA, Philips, and Colpix! The groove here is often as soul-based as it is vocal jazz – thanks to arrangements from David Matthews, who brings a ... CD

Bethlehem Years
Bethlehem/Shout Factory, Late 50s. Used
CD...$3.99
Excellent work from Mel Torme – material recorded in the late 50s for Bethlehem Records – easily one of our favorite periods in the career of the Velvet Fog! The tunes here are tremendous – numbers that are tightly jazzy, often with hip west coast backing from arranger Marty ... CD

Ted Steele Presents Miss Teal Joy (with bonus tracks)
Bethlehem/Solid (Japan), 1955. Used
CD...$13.99
A great little album from this overlooked singer – an east coast vocalist from the 50s, working here on one of the few sessions she ever recorded! Teal's got an exotic look on the cover, but the presentation of the music is right up there in the best mainstream jazz modes of the time – ... CD

Sarah Vaughan With Clifford Brown (with bonus track)
EmArcy/Polygram, 1954. Used
CD...$4.99 (CD...$2.99)
A jazz vocal masterpiece from Sarah Vaughn – one of her greatest albums ever, and a record that raised the bar for countless vocal sessions in years to come! Sarah's working here in an intimate group arranged by Ernie Wilkins – filled with famous trumpet solo work by Clifford Brown, ... CD

Doozy
Open Art, 2009. Used 2 CDs
CD...$4.99
A wonderful 2CD set from Jackie Ryan – a contemporary California vocalist, but one who sings with a really classic sort of groove! The album reminds us a lot of Bay Area jazz gems from the 70s – warm and soulful, with an easygoing groove that draws heavily from the instrumental work of ... CD