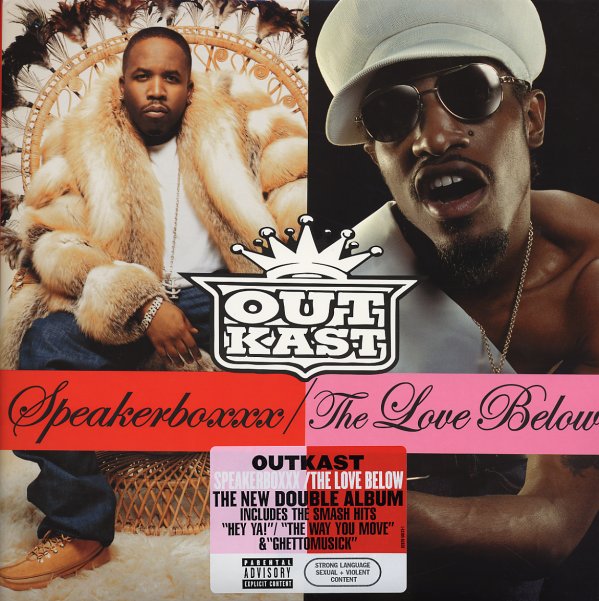 Pick any 10 words out of any Outkast album description on our pages at random, and you'll see how dearly we've loved these boys throughout the years – but truth be told, deep down we didn't think that they would be able to pull off the double album/solo album project(s). We were seriously wrong – Speakerboxxx/Love Below is HUGE in every way, and both halves are great all the way through! If you were worried Big Boi's Speakerboxxx half would be lazy southern hip hop without Andre's freaky presence throughout, you can put those fears to rest right now. Speakerboxxx is a deeply soulful electro hopping pounder from front to back – every bit as innovative as Andre's half! Tracks include "Ghettomusick" (which features one of just two appearances by A3000 on the whole disc), "Bowtie" with Sleepy Brown, "Bust" with Killer Mike, "Church", "Tomb Of The Boom" with Konkrete, Big Gipp and Ludacris, "Flip Flop" with Jay-Z, "The Way You Move" and more. A lot of press has been given to the assumption that Andre 3000 has largely forsaken hip hop on his half (The Love Below) and has instead dived head first into cosmic future funk. Well, the rumors are true. There's lots of straight up jazz piano and horn bits on the Love Below, with Andre's half serious, half tongue-in-cheek romantic soul cabaret croon way over the top. It's steeped in the classic Outkast party vibe, but with lots of Sign Of The Times-era Prince (complete with androgynous distorted vocals), Parliament and Cameo thrown into the mix. Sick, energetic genius! Tracks include the deliriously great "Hey Ya!" single, "She Lives In My Lap", "Love Hater", "Happy Valentine's Day", "Roses", "Good Day, Good Sir", "Behold A Lady", "Pink And Blue", "Spread", "Dracula's Lady" with Kelis, and more. Who the hell knows what they can possibly do to surprise us after this – but wherever Andre 3000 and Big Boi go from here, they each have yet another classic in the discography!  © 1996-2023, Dusty Groove, Inc.

Run The Jewels (orange vinyl pressing)
Fool's Gold, 2013. New Copy (reissue)
LP...$22.99 24.98
El-P and Killer Mike finally deliver a killer duo record! We knew that this one would be a win, considering how great the El-P produced RAP Music album by Killer Mike turned out to be, how versatile the El-P futuristic production vibe is and how timelessly inventive each rapper is on their own. ... LP, Vinyl record album