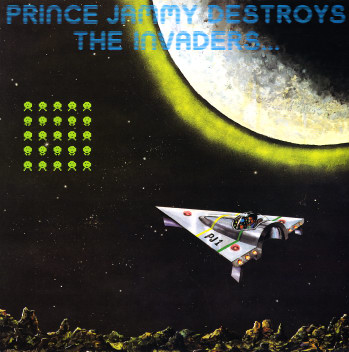 This is sort of a Prince Jammy riff on the format of the popular Junjo Lawes-produced Scientist dub series. Nonetheless, he steps up to bat, and indeed defeats the evil planet munchers, with the able help of the Roots Radics rhytnm section. Recorded at Channel One and mixed at Tubby's – and how can you argue with that!? Fat, heavy rhythms dubbed into deep, deep outer space by the heir to the throne! 8 tracks in all, including "Conspiracy On Neptune", "Saturn Bombardment", "Attack on Ganymede", "Martian Encounter", "The Great Red Spot", "Life On Uranus", "Final Destruction" and "War In The Asteroid Belt".  © 1996-2022, Dusty Groove, Inc.