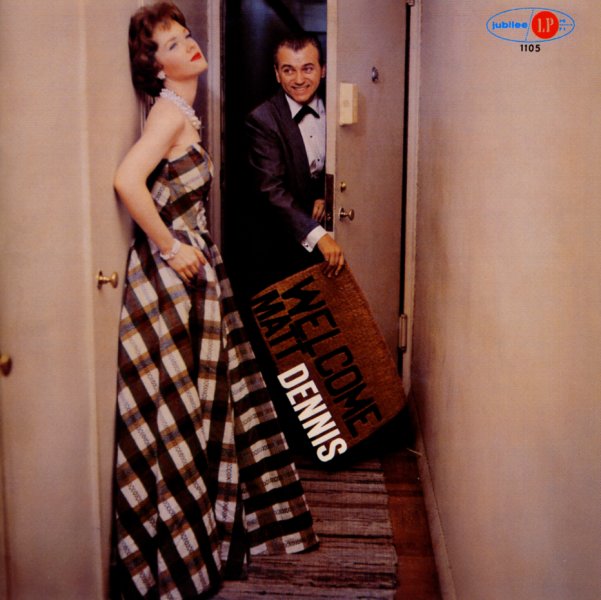 A lesser-known set from vocalist Matt Dennis – not as well-remembered as his 50s dates for RCA and Kapp, but still pretty darn great nonetheless! Matt's working here with full backings from Sy Oliver – in a set that showcases his talents more as a singer than a songwriter – but which still manages to include a few great Dennis originals. And despite a cover that looks a bit lurid – with Dennis cornering a model inside a hotel room – the overall feel of the record is quite homey and domestic, with tunes that echo images of hearth and family, but often with the kind of nod and a wink which you might expect from Matt's usual approach to a tune. Titles include "Home", "Welcome Mat", "Back In Your Own Back Yard", "By The Fireside", "A Cup Of Coffe A Sandwich & You", "Let's Put Out The Lights", and "Your Family".  © 1996-2021, Dusty Groove, Inc.
(Out of print.)

Future Talk
Inner City, 1979. Used
CD...$9.99
A wonderful album of hip jazzy vocals from Urszula Dudziak – an amazing singer who was sort of Poland's version of Flora Purim! Like Flora, Urszula had a fierce scatting and riffing style that broke way past the work of earlier female jazz singers – and she always applied this style to ... CD

Gone For The Day (plus Fair & Warmer)
Capitol, 1957. Used
CD...$5.99 (LP...$5.99)
Vocalist June Christy is one of the greatest under-recognized talents of the postwar era, and it's great to see that reissue CDs like this are finally getting her work back into the public again! Both albums on this CD were recorded in 1957, with arrangements by the icy genius Pete Rugolo, who ... CD

Blossom's Planet
Daffodil, 2002. Used
CD...$16.99
A new record by Blossom Dearie – and a really nice one! The set's on her own Daffodil label, but unlike a lot of the sets on that label, which are mostly trio ones, this one features a full group – with great arrangements by Cesar Camargo Mariano, a talent behind some of our favorite ... CD

He Loves Me, He Loves Me Not
Atlantic (Japan), 1956. Used
CD...$19.99
A fantastic cover, and some great music to match – a key early classic in Chris Connor's late 50s run for Atlantic Records! As on her debut for the label, Ralph Burns handles the arrangements here – in a mode that's somewhat modern, but never too academically so – with just the ... CD