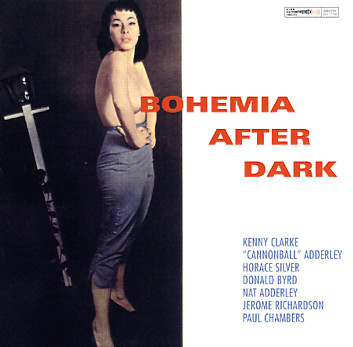 Bohemia After Dark (with bonus track)

An excellent hardbop session from the glory days of the Savoy label – easily one of the label's key 50s classics! Drummer Kenny Clarke's at the front of the group – but all players are great, and the set features work by Cannonball Adderley on alto, Jerome Richardson on tenor, Donald Byrd on trumpet, Nat Adderley on cornet, Hank Jones or Horace Silver on piano, and Paul Chambers on bass. The Adderley brothers sound especially great – and the young Cannonball has a quality here that's more soulful and sharp-edged than his work on Mercury – much more in a Prestige blowing session style! Titles include "Late Entry", "Chasm", "Bohemia After Dark", and "Hear Me Talkin To Ya". CD features the bonus track "Caribbean Cutie".  © 1996-2023, Dusty Groove, Inc.
(Out of print.)

Imagination
Savoy, Late 50s. Used
CD...$14.99
One of the coolest albums that Curtis Fuller ever recorded for Savoy – a sharp-edged set of modern jazz that really matches the abstract painting on its cover! Fuller's material from this point is always pretty darn great, but this album seems to go ever farther than usual – coming ... CD