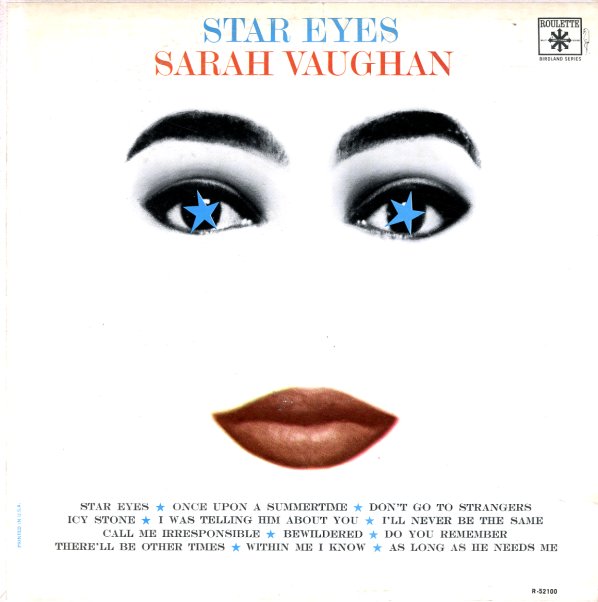 A gem from the Roulette Records years of Sarah Vaughan – material that sometimes gets a bit overlooked, partly because of its packaging – but which may well be some of our favorite material by the singer! Vaughan here is in her mature, boozy mode – the same Sarah we heard on the classic Snowbound and After Hours albums for the label – and the music has a blue-tinged blend of strings provided by Marty Manning, recorded by Henry Glover with this magical balance that still has Vaughan's vocals right out front – stark and spare, as if the bigger orchestra isn't even around – as she works incredible curves and inflections to the lyrics of the tunes – so that each performance makes the lyrics completely her own. Titles include "Star Eyes", "Once Upon A Summertime", "As Long As He Needs Me", "There'll Be Other Times", "I Was Telling Him About You", and "I'll Never Be The Same".  © 1996-2021, Dusty Groove, Inc.
(Mono pink & orange label pressing. Cover has minimal wear, light aging, small stickers on front, and small name stamps on back.)

New Kind Of Love
Roulette, 1963. Very Good
LP...$1.99
Joe Williams is away from Count Basie here, but he's still sounding great – and getting a slightly warmer approach overall – in keeping with the promise of the title! The arrangements aren't credited on the notes, but they've got a slightly lusher feel than Basie – a bit more ... LP, Vinyl record album

Jeri Southern Meets Johnny Smith
Roulette, 1958. Very Good+
LP...$28.99
Jeri Southern can be a hell of a jazz singer when she wants – and that was definitely the case on this gem of a record – a laidback small combo setting with excellent guitar accompaniment from Johnny Smith! Smith's trademark tones really color the record in a great way – ... LP, Vinyl record album

Italia
Roulette, 1959. Very Good
LP...$8.99
The debut album from Pier Angeli – equally known for her acting ability as well as her singing – and working here in a swinging late 50s American take on the sound of Italian pop! Pier was married to singer Vic Damone, and while his style's perhaps a bit fuller and more emotive than ... LP, Vinyl record album