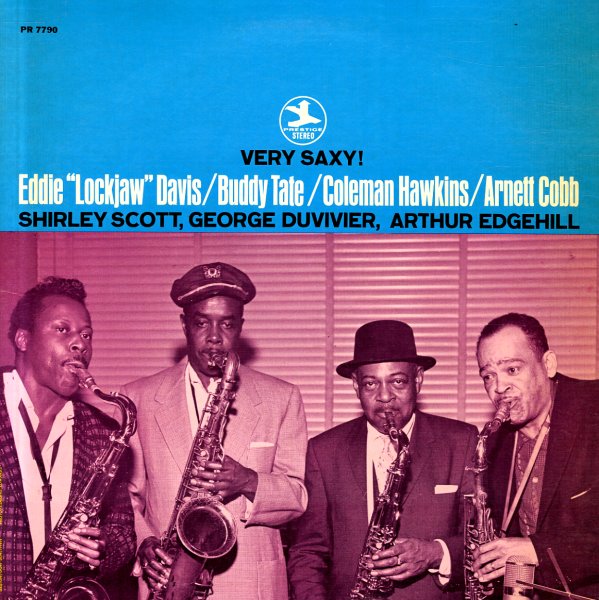 The title's terrible, but the album's a great one – a really classic-styled jam session, of the sort that the Prestige label hardly ever recorded! The session features 4 tenor giants of slightly older vintage – Eddie Lockjaw Davis, Coleman Hawkins, Arnett Cobb, and Buddy Tate – all coming together in some loosely-structured arrangements that offer the same sympathetic blowing space that you might get from an all-star tenor date on Verve. Rhythm is by a trio with Shirley Scott on organ, George Duvivier on bass, and Art Edgehill on drums – and titles include "Very Saxy", "Fourmost", "Foot Pattin", and "Light & Lovely".  © 1996-2020, Dusty Groove, Inc.
(Green label pressing. Cover has a sticker long part of the spine.)

Four Altos (2nd cover)
Prestige, 1957. Near Mint-
LP...$7.99
Four altos in perfect formation – a record that captures a young Phil Woods at the height of his powers, and offers a rare non-baritone set from the great Sahib Shihab! The style here is similar to the Prestige tenor blowing sessions of the time – with core rhythms by a trio that ... LP, Vinyl record album