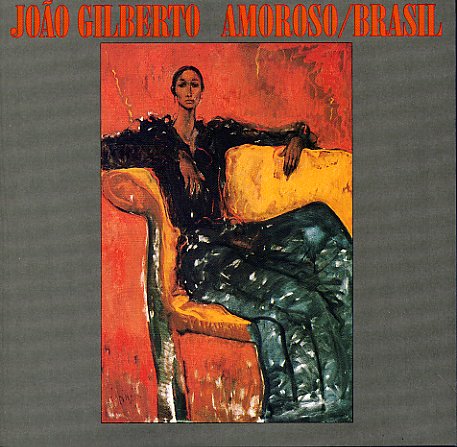 A collection of two albums that Joao Gilberto did for Warner Brothers in the late 70s/early 80s. Amoroso is some pretty sweet stuff from Joao Gilberto – featuring a core jazz combo playing along with a larger set of arrangements, in a manner that's similar to some of Jobim's work from the 70s. The album features a nice vocal version of Jobim's "Wave" and "Zingaro", plus the tracks "Estate", "Tin Tin Por Tin Tin", and "Besame Mucho". On Brasil, Joao Gilberto meets the younger generation of Brazilian vocalists – Caetano Veloso, Gilberto Gil, and Maria Bethania – and the four of them lay down some nice jazzy stuff, with all the vocals weaving in and out. Tracks are nice and long, and titles include "Cordeiro De Nana", "Aquarela Do Brasil", "Milagre", and "Bahia Com H". Johnny Mandel conducted, and Joao produced.  © 1996-2022, Dusty Groove, Inc.

Personalidade
Philips, Mid 60s. Used
CD...$3.99 5.99
A later collection, but one that includes some of Joao Gilberto's great 60s work for Verve. CD

O Eterno Deus Mu Danca
Warner, 1989. Used
CD...$1.99
Gilberto Gil gets off to a nicely soulful start here – by bringing in a guest appearance from Ed Motta on the album's title track – then keeping things in a nice mix of samba and soul throughout the entire album! There's a few slight touches of 80s production, but overall there's a lot ... CD

Elis, Essa Mulher
Warner (Brazil), 1979. Used
CD...$8.99
Really great late work from Elis Regina – recorded in the company of arranger Cesar Mariano, whose masterful touch made for some of Elis' best albums of the 70s! Cesar arranged and conducted here, and although the production is perhaps a bit more contemporary than Elis' work for Philips, the ... CD

To Be Alive Is Good (Anos 80)
Warner (Brazil), 1980s. Used
CD...$9.99
A great collection of work by Gilberto Gil – tracks recorded throughout the 80s, and done in a variety of styles, all of which show him at his best during the time! Lots of the tunes step off the smooth soul and funkier modes of the late 70s, taking Gil into the strongly R&B-influenced ... CD