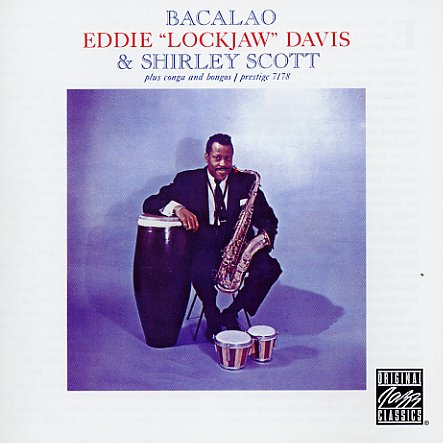 A pretty rare one – and one of the best albums that Eddie Lockjaw Davis ever recorded! The album takes Eddie's usual trio with Shirley Scott on organ, and adds in some extra bongos and conga – by Luiz Perez and Ray Barretto, respectively – to create a Latinized version of soul jazz, with a very nice swing! The album grooves well on nearly every track – almost in the mode of Eddie's classic Afro-Jaws album – and the setting really brings out the best in his tenor work, cutting across lines in a way that almost hearkens back to his R&B days. Titles include "Dobbin The Redd Foxx", "Last Train From Overbrook", "Fast Spiral", "Dancero", and "That Old Black Magic".  © 1996-2021, Dusty Groove, Inc.
(Yellow & black label NJ pressing with deep groove and RVG stamp. Cover has some light wear and light aging near the opening edge, but is nice overall – and vinyl is nice and clean.)