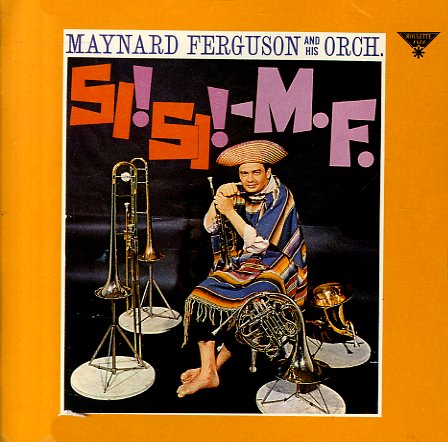 Very hiply swinging work from Maynard Ferguson – not as Latin-based as you might think from the title, but great nonetheless! The record features an excellent group that includes Don Rader on trumpet, Lanny Morgan on alto, Rufus Jones on drums, and Don Menza on tenor – all tightly wrapped around Maynard's baton, grooving with a style that's at once impeccably unified, but also very able to make room for the well-blown solo. Titles include "Morgan's Organ", "Si Si MF", "What'll I Do", "Early Hours", "Morgan Point", and "Straight Out". A real groover!  © 1996-2022, Dusty Groove, Inc.
(Orange and pink label pressing. Cover has light wear and small splits on the bottom seam.)

Message From Birdland
Roulette, 1959. Very Good+
LP...$8.99 (CD...$9.99)
Put aside your reservations about Maynard Ferguson, because this is a very hip little record – one of Maynard's excellent early sessions for Roulette Records, and like the rest, done with a group that's overflowing with top-shelf players! Ferguson's definitely got a great ear for putting ... LP, Vinyl record album

Parallel-A-Stitt
Roulette, Mid 60s. Near Mint-
LP...$19.99
Hmmmmm . . . Can't figure out the title, but the record's a nice batch of mellow groovers, played by Stitt on the Varitone, which he was working very heavily with Selmer to promote at the time. The backing's got some strong players – like Don Patterson on organ, Jerome Richardson on flute, ... LP, Vinyl record album

No Coast Jazz
Roulette, Mid 60s. Very Good
LP...$24.99
A stunner of an early album from reedman John Handy – completely different from both his experimental music of the mid 60s, and from his funkier sides of the 70s! Instead, John comes across here with a simple, unadorned brilliance – a bold statement of modernism mixed with soul, and ... LP, Vinyl record album

Basie (aka E=MC2)
Roulette, 1957. Very Good
LP...$29.99
One of THE seminal Basie albums of all time – and a masterful pairing between the Count and arranger Neal Hefti! Hefti has an amazing ear for the Basie groove, and he works here to re-fit the overall sound of the group with a tighter, more fluid approach – one that ensured that they'd ... LP, Vinyl record album

Basie Plays Hefti
Roulette, Late 50s. Very Good
LP...$5.99
Tremendous work from one of the greatest pairings in 50s jazz – the crack later group of Count Basie and the amazing arranging talents of the great Neal Hefti! Hefti later went onto greater fame as a 60s soundtrack composer, but back in the day him and Basie were an incredible team together ... LP, Vinyl record album

Legend – From The Pen Of Benny Carter
Roulette, Early 60s. Very Good
LP...$9.99
Benny Carter was really on fire in the 60s – a saxophonist who was not only re-asserting his role as a soloist, but also a growing new talent in the field of arranging, as well – on records like this killer outing with the Count Basie group, and a host of other excellent albums to come! ... LP, Vinyl record album