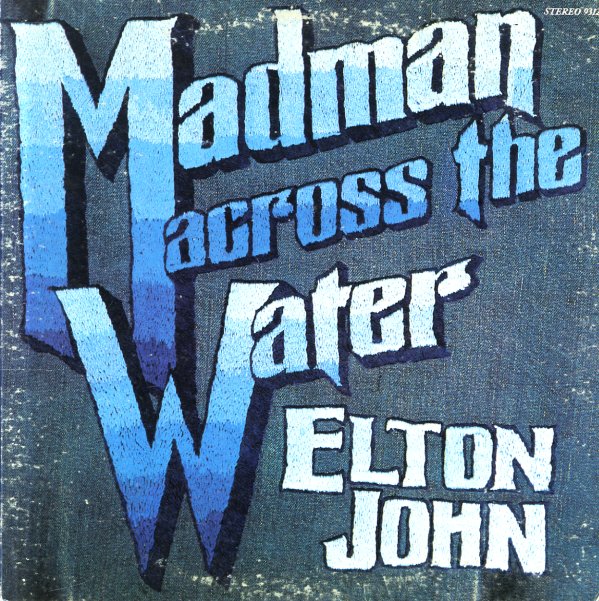 Also available
Elton John — Madman Across The Water (50th Anniversary 2CD edition – with bonus tracks) ... CD 27.99
A set that may well be the record where Elton John totally gets it together – transcending his already-brilliant previous recordings, and finding a way to the special spot that would forever make him a legend! There's a mix of well-crafted songs and soulful presentation that's completely superb here – very personal, very much that new Elton John mode that made thte approach of him and Bernie Taupin so different than so many others in this heady generation of singer/songwriters – and that's really saying a lot! Production and arrangements are great, too – up-close when needed, and never overdone – testified to by the album's classic lineup of tracks that includes "Tiny Dancer", "Levon", "Razor Face", "Madman Across The Water", "Holiday Inn", "Indian Sunset", and "All The Nasties".  © 1996-2022, Dusty Groove, Inc.
(70s black label MCA pressing. Cover has a gold Platinum Plus stamp.)

Complete Thom Bell Sessions
MCA, 1979. Near Mint-
LP...$19.99
Philadelphia Freedom from Elton John – a trio of tracks recorded with legendary Philly Soul producer Thom Bell, all with a Sigma Sound vibe that's quite different than most of John's other work at the time! In fact, although these tracks were recorded right at the height of the disco era, ... LP, Vinyl record album

Ark 2
Uni, 1969. Very Good+ Gatefold
LP...$14.99 19.99
Phil Collins, whatever happened to you? You sounded so great on this album – recorded with your first group before Genesis, when you knew how to hit the drums nice and loud! The rest of the group's not too bad, either – and the album's got a great spacey jazz rock sound, mixed with ... LP, Vinyl record album