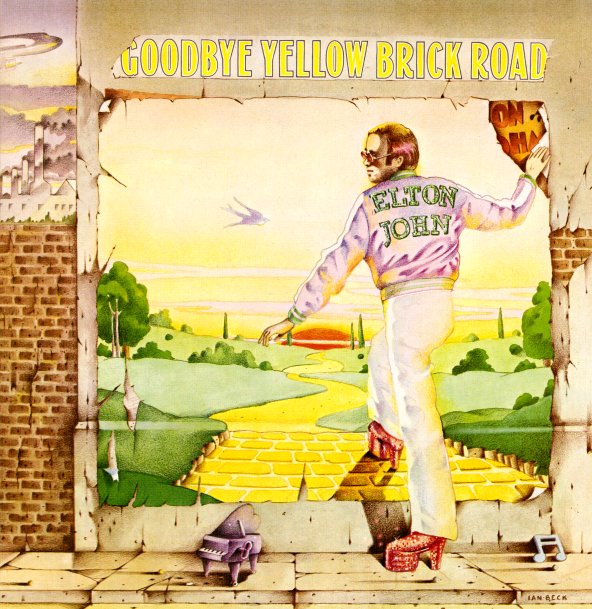 Also available
Elton John — Goodbye Yellow Brick Road ... CD 4.99
The crowning achievement of a young Elton John – and the record that took an already-great run of earlier records, and pushed it even further with a new depth of songwriting and imagination! The double-length set isn't exactly a concept album – at least not one with a unified narrative – but it works beautifully as a set of little pictures of the world seen through the eyes of Elton and Bernie Taupin – both at the height of their powers, and able to balance catchy commercial tunes with some grittier undercurrents. The set's filled with classics – and titles include "Candle In The Wind", "Funeral For A Friend/Love Lies Bleeding", "Bennie & The Jets", "Social Disease", "Saturday Night's Alright For Fighting", "Harmony", "Jamaica Jerk-Off", and "Goodbye Yellow Brick Road".  © 1996-2022, Dusty Groove, Inc.
(Original pressing in the tri-fold cover.)

Madman Across The Water
Uni, 1971. Very Good Gatefold
LP...$24.99 (CD...$27.99, CD...$1.99)
A set that may well be the record where Elton John totally gets it together – transcending his already-brilliant previous recordings, and finding a way to the special spot that would forever make him a legend! There's a mix of well-crafted songs and soulful presentation that's completely ... LP, Vinyl record album

Elton John
Uni, 1970. Very Good Gatefold
LP...$7.99
The first real moment of genius from Elton John – a record issued with an understated cover and title, but which set the scene for all the greatness to come from the singer in the 70s! The strength of the Bernie Taupin partnership is on full display here – through a set of amazing ... LP, Vinyl record album