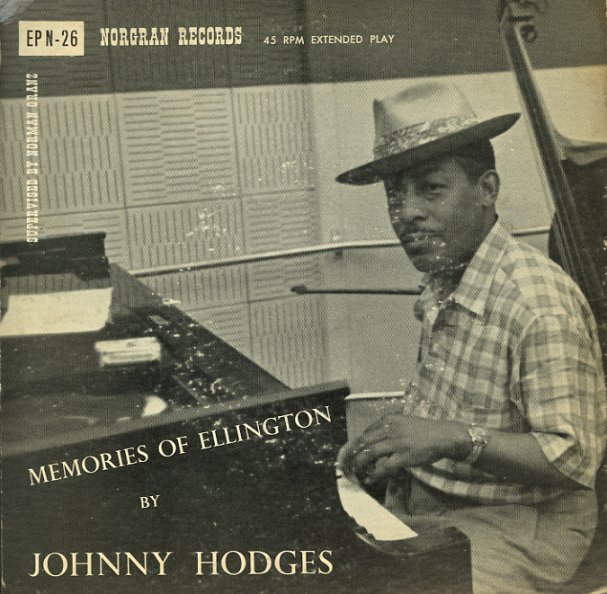 With Ben Webster on tenor, Lawrence Brown on trombone, Emmett Berry on trumpet, Leroy Lovett on piano, and Lloyd Trotman on bass; and featuring Flip Phillips and Al Sears on tenor, and Sonny Green on drums. Titles include "In A Mellow Tone", "I Let A Song Go Out Of My Heart", "I Got It Bad And That Ain't Good", "Sophisticated Lady", "Solitude", and more.  © 1996-2022, Dusty Groove, Inc.
(Heavy yellow label Norgran pressing with trumpter logo and deep groove. Vinyl has a mark that clicks a bit on "In A Mellow Tone". Cover has some edge wear and yellowing from age.)

Don't Sleep In The Subway
Verve, 1967. Very Good+ Gatefold
LP...$6.99 9.99
Although the set's a groovy batch of shorter jazz tracks, with larger arrangements by Jimmy Jones, Hodges still solos nicely, and with that trademark tone that always cuts through the b.s.! The title cut's a mis-chosen version of Petula Clark's big hit, but the record's actually got some other ... LP, Vinyl record album

Everybody Knows Johnny Hodges
Impulse, 1964. Near Mint- Gatefold
LP...$29.99 34.99 (CD...$6.99)
A nice little 60s album by Johnny Hodges – one of the few post-Verve sessions that has him still playing in the hard swinging Ellingtonia small combo mode of the 50s! Players are all strong – and include Jimmy Jones, Cat Anderson, Ray Nance, Harry Carney, and Paul Gonsalves – and ... LP, Vinyl record album

Workshop Of The George Wallington Trio/Eddie Costa Trio
Norgran, Early 50s. Near Mint-
LP...$24.99
A split Japanese album – with two rare 10" sessions from Verve! Side one features rare George Wallington trio material for Verve – with Curly Russell on bass and Art Taylor on drums. Titles include "Before Dawn", "If I Love Again", "Your Laughter", ... LP, Vinyl record album

Modern Jazz Sextet
Norgran, 1956. Near Mint-
LP...$24.99
That's the Modern Jazz Sextet – not the Modern Jazz Quartet – although the group definitely borrows a bit of energy from the MJQ, and some personnel too! The group was only put together for this date – and combines the subtle touches of MJQ members John Lewis on piano and Percy ... LP, Vinyl record album

Swinging Buddy Rich
Norgran, Early 50s. Very Good
LP...$19.99
Buddy's got plenty of help to swing with here – on a set that features work by Benny Carter, Sonny Criss, or Willie Smith on alto, George Auld on tenor, Harry Edison on trumpet, and Gerald Wiggins on piano. The alto work of Smith and Criss is especially great – raspy, edgy, and with a ... LP, Vinyl record album

Sing & Swing With Buddy Rich
Norgran, Early 50s. Very Good-
LP...$19.99
A record that serves up just what you'd expect from the title – a bit of raspy vocals from Buddy Rich – and some swinging instrumental material, with a group that features Ben Webster on tenor, Joe Newman on trumpet, Oscar Peterson on piano, and Freddie Greene on guitar! LP, Vinyl record album