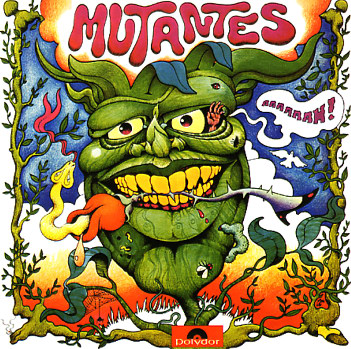 Quite possibly the last truly sublime album ever recorded by Os Mutantes – a set that's a bit more rock-oriented then their first few, but still pretty revolutionary overall! The group have expanded to a quintet at this point, but haven't yet falling into the guitar-heavy groove of later years – and Rogerio Duprat is working with the group on arrangements, although Mutantes member Arnaldo Baptista is handling production chores himself. Odd styles still slide into the mix as the tunes roll on – creating that great sense of surprise that makes their best work so great, and keeping things fresh even when a bit more straight ahead! Titles include a reprise of "Baby", one of the group's early classics – plus "Portugal De Navio", "Virginia", "Tecnicolor", "El Justicero", "Lady, Lady", "Sarava", "It's Very Nice Pra Xuxu", and "Top Top".  © 1996-2021, Dusty Groove, Inc.
(Out of print.)

Os Mutantes Ao Vivo – Barbican Theatre Londres 2006
Sony (Brazil), 2006. Used 2CD
CD...$14.99
The glorious return of Os Mutantes – a recent live performance that marks the group's first new album in many many years! The show was recorded before a very enthusiastic audience in London – at a time when the city was in the throes of a recent new wave of interest in Tropicalia ... CD