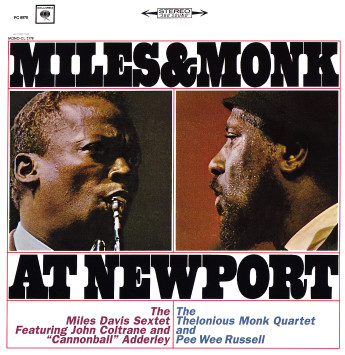 A slightly misleading record – but a great one nonetheless! From the title and cover, you might imagine that Thelonious Monk and Miles Davis were sharing the stage together at the Newport Jazz Festival – but instead, the album actually features separate performances by each artist – actually even recorded 5 years apart! The Miles Davis recording is from 1958 – a great year that has John Coltrane working with the group, alongside Wynton Kelly on piano, Cannonball Adderley on alto, Paul Chambers on bass, and Jimmy Cobb on drums – performing lively versions of "Ah Leu Cha", "Straight No Chaser", "Fran Dance" and "Two Bass Hit". The Monk material is even more unique – recorded in 1963, with Monk's usual quartet of Charlie Rouse on tenor, Butch Warren on bass, and Frankie Dunlop on drums – joined by the legendary Pee Wee Russell on clarinet – recently revived in jazz at the time, and displaying surprisingly modernist tendencies! Both Monk tracks are long – and include versions of "Nutty" and "Blue Monk".  © 1996-2022, Dusty Groove, Inc.
(70s pressing, PC 8978. Cover has minimal wear.)

Head Hunters
Columbia, 1973. Very Good+
LP...$59.99 (LP...$37.99)
A seminal jazz funk session of the 70s – Herbie Hancock's legendary meeting with The Headhunters, and a killer batch of tunes that really gave the combo their name! Herbie's playing a wide range of keys here – including Fender Rhodes, clavinet, and Arp – but almost even better is ... LP, Vinyl record album

Masterpieces By Ellington
Columbia, 1950. Very Good+
LP...$34.99
True masterpieces from Duke Ellington – some of his greatest compositions, presented here in an early Columbia LP that offers up "uncut concert arrangements" – clearly grooming a new side of Duke for the long-playing audience! The recordings were made in 1950, with players ... LP, Vinyl record album