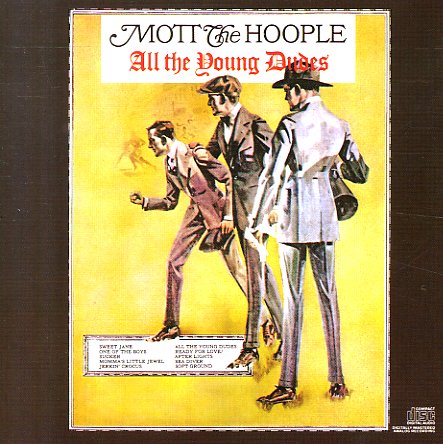 All The Young Dudes

Maybe the most classic of all the Mott The Hoople albums of the early 70s – thanks in part to the classic title track, which was given to the group by David Bowie! Yet that hit is only one of many gems within – all delivered in a style that shows that Ian Hunter and the group were maybe in the territory of Mick Ronson and Bowie before they find their way with Ziggy – delivered here perfectly on tunes that have all the best elements of glam, but maybe more hard rock permanence and lyrical sensitivity too! In addition to "All The Young Dudes", the set also features a great remake of the Velvet Underground's "Sweet Jane" – and the cuts "Soft Ground", "Sea Diver", "Sucker", "Jerkin Crocus", and "Momma's Little Jewel".  © 1996-2022, Dusty Groove, Inc.
(Cover has surface wrinkles throughout, with split seams held with clear tape, and surface wear.)

River
Columbia, 1980. Near Mint- 2LP
LP...$13.99
Prime classic Springsteen double album, circa 1980! The River finds Bruce a few years removed from the massive breakthrough that was Born To Run, and seemingly starting to let go of the darker tone of Darkness On The Edge Of Town, though still with some shadows of it. Definitely a creative high ... LP, Vinyl record album

3
Columbia, 1970. Near Mint- Gatefold
LP...$6.99
Blood Sweat & Tears are really stretching out here – working their already-famous magic through a range of great tunes, both originals and covers – and coming up with some great longer-form expressions of their sound in the process! David Clayton-Thomas is firmly in the lead on ... LP, Vinyl record album

Nashville Skyline
Columbia, 1969. Very Good
LP...$19.99 (CD...$2.99)
Dylan's wonderful foray into country rock – the great Nashville Skyline! He takes his voice into a strangely crooning arena that we hadn't heard from him before or since, kinda adding a mysterious vibe of the whole thing. Titles include a duet with Johnny Cash on "Girl From The North ... LP, Vinyl record album

Full Sail
Columbia, 1973. Very Good+ Gatefold
LP...$2.99 (CD...$4.99)
A great mix of sophisticated pop and lighter, more tropical numbers – and one of the best albums ever to emerge from the union of Kenny Loggins and Jim Messina! The album's got a special place in our heart, thanks to the classic tune "Pathway To Glory" – an extended, slow-buil ... LP, Vinyl record album