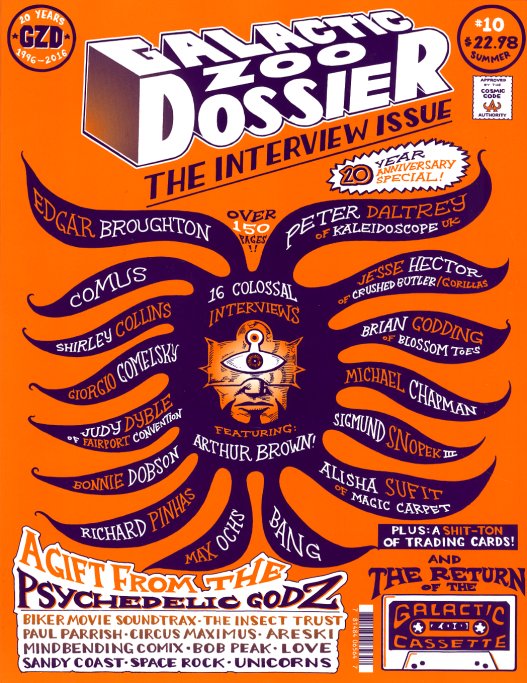 The milestone 20 year anniversary issue of cosmic music magazine Galactic Zoo Dossier – #10 overall and the first new issue in 4 years – "a gift from the psychedelic godz" and well worth the wait! The Interview Issue, too, it features Arthur Brown, Bang, Max Ochs, Shirley Collins, Michael Chapman, Bonnie Dobson, Richard Pinhas and more – plus pieces on Biker movie soundtracks, Circus Maximus, The Insect Trust, a cool In Memorium section with illustrated portraits of departed heroes. and tons more cool stuff! What takes so long? Well, GZD is the brainchild of author/artist/interviewer/illustrator Steve "Plastic Crimewave" Krakow who handles the aforementioned jobs himself, hand drawing most of the zine, with minimal help from contributors – everything from artist portraits to custom ads, in the style of his long-running Secret History Of Chicago Music column in The Chicago Reader, though much, much richer in breadth and scope! It's over 150 pages (!!!) and comes with some mindblowing bonus material – including a thick stack of perforated "Damaged Guitar God" trading cards – plus a cassette with exclusive tracks by Jesse Hector, Nick Garrie, Bang, Comus, Peter Daltrey, Edgar Broughton, Michael Chapman and more!  © 1996-2022, Dusty Groove, Inc.
(Includes a Galactic Zoo compilation cassette & trading cards.)