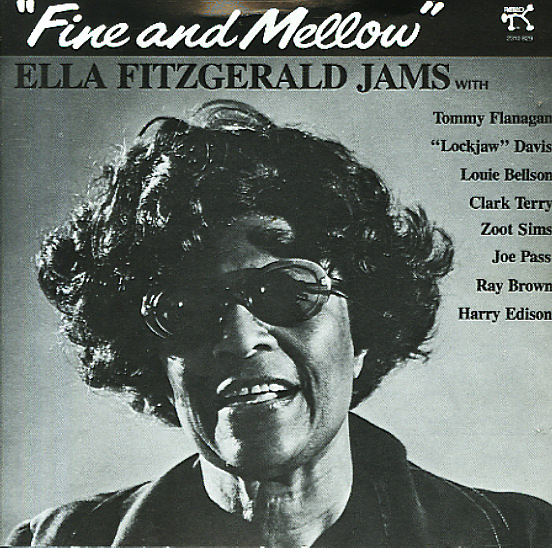 Nice small group backing – from a group that features Harry Edison and Clark Terry on trumpet, Zoot Sims and Eddie Lockjaw Davis on tenor, Joe Pass on guitar, and Tommy Flanagan on piano!  © 1996-2022, Dusty Groove, Inc.
(Cover has light wear and a small peel spot at the opening.)

Rhythm Is My Business
Verve, Early 60s. Very Good
LP...$6.99
They're not lying with the title on this one, as Ella's singing to backings from the great Bill Doggett – who cooks up some of the liveliest rhythms Ella ever received from Verve! The style is still similar to other Verve records of the time – with that magnificent Fitzgerald vocal ... LP, Vinyl record album

Crazy & Mixed Up
Pablo, 1982. Very Good+
LP...$14.99 23.99
Nothing crazy and mixed up here, but a wonderful later date from Sarah Vaughan – one that's recorded with subtly sophisticated brilliance! The setting is easygoing and relaxed – far more so than most of Vaughan's records from many years past – and backing is provided by Roland ... LP, Vinyl record album

Duke Ellington Songbook Vol 2
Pablo, 1979. Near Mint-
LP...$4.99 (CD...$4.99)
Sarah Vaughan takes on the work of Duke Ellington – almost presented here in a style that's similar to some of the Songbook albums on Verve from the 50s! Billy Byers handles most of the arrangements here – especially on the larger group numbers – but some tracks are also in a ... LP, Vinyl record album

Duke Ellington Songbook Vol 1
Pablo, 1979. Sealed
LP...$6.99 16.99 (CD...$24.99)
Sarah Vaughan takes on the work of Duke Ellington – almost presented here in a style that's similar to some of the Songbook albums on Verve from the 50s! Billy Byers handles most of the arrangements here – especially on the larger group numbers – but some tracks are also in a ... LP, Vinyl record album

Montreux 77
Pablo, 1977. Near Mint-
LP...$2.99 16.99
Ella Fitzgerald swings it nicely with the Tommy Flanagan Trio – a small group on the date for backup, but one who give this Montreux performance almost as much bounce as Ella's 70s live dates with a bigger ensemble! Tommy seems to have a bit more punch in his piano than usual, and Fitzgerald ... LP, Vinyl record album