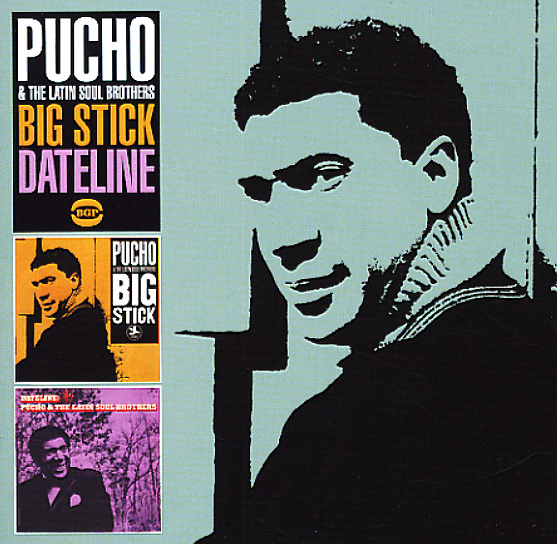 Two rare gems from this legendary Latin group – both on CD for the first time ever! Big Stick is quite possibly the rarest album from Pucho & The Latin Soul brothers – and also one of the greatest, too – thanks to a wonderfully soulful vibe overall, and some wicked vocals from the great Jackie Soul! Arrangements are a bit bigger than some of their previous dates, but nicely offbeat too – put together by Bill Fisher, and featuring loads of great keyboards and organ from Neal Creque! The sound's got less horns than beofre, but the heavy percussion, keyboards, and vocals more than offset that loss – and make for one of the most unique Pucho albums ever! Titles include "Swamp People", "Left In the Cold", "Big Stick", "Cold Shoulder", and a very groovy version of "Sunny"! Dateline is a rare gem from Pucho & The Latin Soul Brothers – and an album that has them really hitting strong on all instrumental fronts! The group sports wonderful piano and organ lines from Neal Creque – a player who helps Pucho hit a more expansive, jazzy vibe – mixed with horns from the always-great Pazant brothers – Eddie on saxes and Al on trumpet – plus some trombone from Barry Rogers too! These players all really help add some great jazzy inflections to the whole set – important, too, because the album's all instrumental – with no vocals to get in the way of the solos. Willie Bivens also plays vibes on the record – and titles include "Listen to Louie", "Dateline", "Yambo", "Bim", and "Ain't Nothin Can Happen".  © 1996-2021, Dusty Groove, Inc.

Saboreando – Pot Full Of Soul (with bonus tracks)
Dorado/BGP (UK), 1969. New Copy
CD...$11.99 18.99 (CD...$8.99)
Lost grooves from Spanish Harlem – an incredible set of Latin Soul from The 107th Street Stickball Team! With a name like that, the group certainly aren't as well-remembered as contemporaries like Joe Bataan or Willie Colon, but they've got a soulful groove that definitely fits the style of ... CD