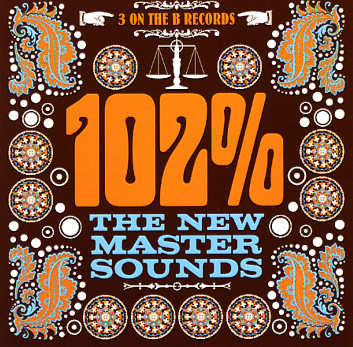 Heavy instrumental funk from the New Mastersounds – a group that seems to get more of an edge with each new release! The sound here is strongly in the Meters side of the funky spectrum – with lots of hard-burning Hammond organ and tightly scratching guitar – all served up with impeccable production that really gets to the heart of the grooves, and leaves all extraneous noise behind! There's a grittiness here that we didn't always hear from NMS in the past – and that quality really keeps this one going strongly all the way through – making the group sound a lot more like some funky 45 combo from years past than on their first few releases. Eddie Roberts plays some very wicked guitar throughout, and he's also at the production helm – responsible for the great sound of this set – an overstuffed batch of funky delights, with 14 tracks that include "Talk Is Cheap", "Witness", "Carrot Juice", "33 (A Fine Year To Die)", "Give Me A Minute (part 2)", "Rope-A-Dope", "Bus Stop No 5", and "LA Root Down".  © 1996-2020, Dusty Groove, Inc.

This Is What We Do
3 On The B, 2005. Used
CD...$8.99
Funky madness from The New Mastersounds – sounding better here than we remember them in years, with a real nitty-gritty quality that reminds us of their best early singles! The grooves on the set are extremely intense – from the percussion-jamming timbales of "The Tin Drum", ... CD

Turn It Out
Velour, 1999. Used
CD...$7.99
New York is what is funky! This is a killer new release by a small organ jazz combo from the Big Apple – and they are definitely worthy members of the city's great end-of-the century funk scene that includes Medeski Martin & Wood, Sugarman Three, and The Other Side! The band have ... CD

In The Studio
Lion Head (Germany), 2009. Used
CD...$8.99
Plenty of drum magic here – a highly rhythmic outing that's built from the talents of a battery of great percussionists, working without any other instrumentation at all! There's a romping, funky sensibility to the music on most numbers – drums and percussion handling not just the ... CD

Break Out
Concord, 2005. Used
CD...$5.99
A well-titled set, given that the album is Soulive's first away from the Blue Note label – a surprisingly tight outing done for the mostly-mellow Concord imprint, and a real back-to-basics outing that we totally love! The group's in fine fine form for the record – working with that ... CD

One Offs, Remixes, & B-Sides
Tru Thoughts (UK), Early 2000s. Used 2CDs
CD...$9.99
Incredible work from Will "Quantic" Holland – easily one of the hardest working men in the groove business! Will's work under the Quantic and Quantic Soul Orchestra name is well known from a few key albums over the past few years – but he's also got a resume that spans far ... CD

Ikebe Shakedown
Ubiquity, 2011. Used
CD...$9.99
The much anticipated full length debut of Brooklyn Afro Funk and psych soul-influenced combo Ikebe Shakedown – following up their tight, promising EP on the Colemine label with an excellent self-titled set on Ubiquity! One of our favorite things about Ikebe Shakedown's style is the way they ... CD

Twentieth Anniversary Mixtapes – Groiddest Shizznits Vol 3
Avantgroidd, 2000s/2010s. Used
CD...$11.99
A fantastic 20th anniversary celebration of Burnt Sugar – one of the most righteous, forward-thinking ensembles of the past few decades – some of the first proponents of a 21st Century sound that now seems to be flowing from many other corners! Yet these guys are still unlike anyone ... CD