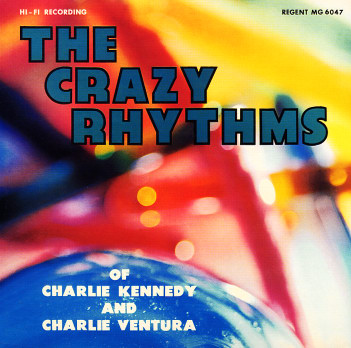 Tremendous tenor work from the mid 40s – a side each of Savoy singles done by Charlie Ventura and Charlie Kennedy, packaged here in a mid 50s album! Kennedy's featured on side one – playing with a small combo that includes Johnny Guarnieri on piano, and B DeArango on guitar – in a relaxed, open mode that's certainly swing-based, but shows some modern jazz inflections on the solos. Side two is even tighter – with Ventura hitting on all burners in a quartet with Arnold Ross on piano and Specs Powell on drums – playing with the fire that made him a strong link between many sides of the jazz spectrum at the time! Kennedy titles include "I'll See You In My Dreams", "Whispering", "I Can't Give You Anything But Love", and "I Can't Get Started" – and Ventura numbers include "Jackpot", "Big Deal", "Dark Eyes", and "Charlie Comes On".  © 1996-2021, Dusty Groove, Inc.
(Out of print.)