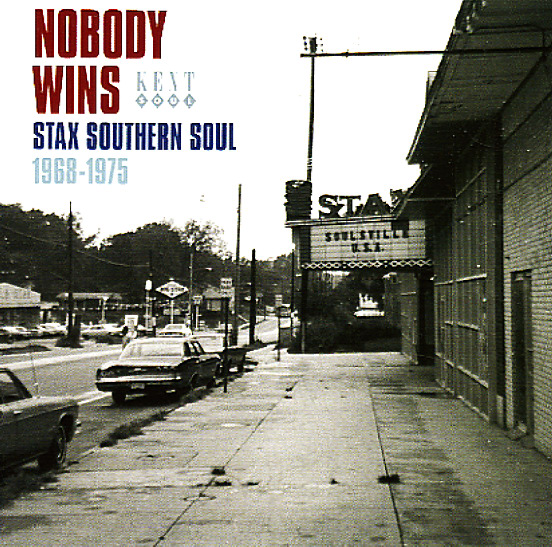 Also available
Various — Nobody Wins – Stax Southern Soul 1968 to 1975 ... CD 12.99
Think you know Stax Records? Guess again – as this mindblowing collection offers up a whole new side of Stax we've never heard before. Forget the hits, forget the overplayed oldies – this set's brimming full of deep soul gems from the legendary Memphis label – including a fair bit of heartbreaking tracks that go way beyond any southern soul cliches! The music is amazing – proof that Ace still really knows how to put together a compilation – and in addition to some real rarities, there's also some killers appearing here for the first time ever – making the whole thing essential to any fan of Stax – or southern soul in general. A massive amount of music, all of it great – and titles include "Stay Baby Stay" by Johnny Daye, "I've Done It Again" by The Charmells, "Move Over" by Soul Children, "Hold On This Time" by Chuck Brooks, "Groovin' On My Baby's Love" by Freddie Waters, "Make A Joyful Noise" by Bettye Crutcher, "The Fault Is Not In Me" by Sylvia & The Blue Jays, "A Love Affair Theat Bears No Pain" by Shack, "Two Fools" by Willie Singleton, "Let Em Down Baby" by Jimmy Hughes, "Love Changes" by Charlene & The Soul Serenaders, and "Woman Across The River" by Little Milton.  © 1996-2022, Dusty Groove, Inc.

Complete Stax/Volt Singles Vol 2 – 1968 to 1971 (9CDset)
Stax, Late 60s/Early 70s. Used 9 CDs
CD...$64.99
A fantastic second helping of work from Stax Records – material from a time when the label had moved away from Atlantic, taken a lot more control of their destiny, and started to experiment in a wealth of wonderful modes! This set is much heavier on funk, features some of Isaac Hayes' great ... CD

Starting All Over Again (plus bonus tracks)
Stax, 1972. Used
CD...$13.99
Ahhh, good ol' Mel & Tim – possibly our favorite soul duo ever, and a really dynamic pair that carve some great new territory away from the path set by Sam & Dave! The album's a bit of a comeback for the duo, as you'd guess from the title – even though it was only recorded a ... CD

Senior Soul/If She Walked Into My Life
Stax/Enterprise, 1972/1974. Used
CD...$7.99
2 early 70s sessions from Billy Eckstine – both recorded for Stax Records! First up is Senior Soul – a well-titled set not only given Billy's age, but also because of the surprisingly soulful undercurrent to the record – an extension into the genre even greater than Eckstine's ... CD

Soul Sounds (with bonus track)
Motown/Reel Music, 1967. Used
CD...$6.99 (CD...$8.99)
A great Motown album from Chris Clark – one of the few white singers ever signed to the label, and a great vocalist at that! Chris has a sound that's quite unique – halfway between Motown soul and some of the soul-inspired pop of the time – particularly that of UK singers like ... CD