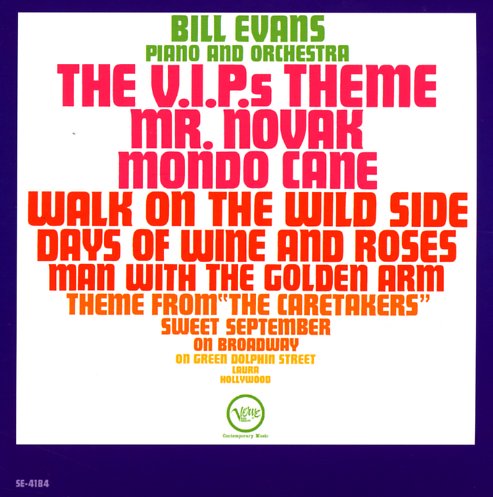 Plays The Theme From The VIPS

An unusual setting for Bill Evans, but a great one too – an early collaboration with arranger Claus Ogerman, who provides some larger backdrops for Bill's frontline piano! The set's not as ambitious as the symphony-styled one from the pair a few years later – and instead, it's got a nicely romping quality that's still mostly jazz, but which also carries a bit more soundtrack or pop instrumental feel too – never too much to make Evans sound crassly commercial, and a nice new setting that stands out from the mostly-trio mode he was recording in during the 60s. Many tunes are early 60s pop or soundtrack numbers, done with a nice sort of sensitivity – and titles include "Days Of Wine & Roses", "More", "The Caretakers", "Theme From Mr Novak", "Hollywood", "Sweet September", and "The Man With The Golden Arm".  © 1996-2022, Dusty Groove, Inc.
(2008 Verve Originals pressing – still sealed!)

Julian Cannonball Adderley
EmArcy/Verve, 1955. Used
CD...$9.99 (LP...$14.99)
Very early work from Cannonball Adderley – recorded way before the funky years, when he was a hard-wailing soulful soloist with a lot of bop in his style! Cannon's paired here with brother Nat, a good companion even at this early stage – and the two of them solo in front of a large ... CD

Beyond The Sound Barrier – Live Performances 2002 to 2004
Verve, 2002/2003/2004. Used
CD...$4.99
A follow-up to Shorter's successful Footprints Live album – done in the same sort of angular and introspective mode, and also with a group that includes Danilo Perez on piano, John Patitucci on bass, and Brian Blad on drums. The overall style's not as much in the joyous, soulful Shorter mode ... CD