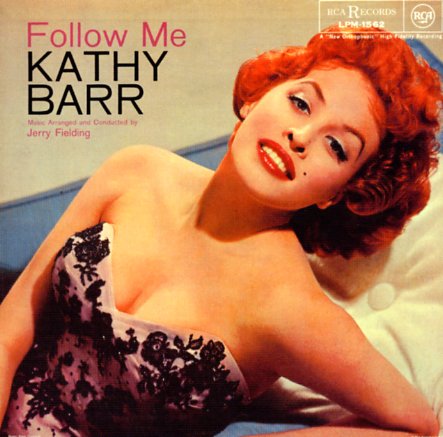 Kathy, we'd follow you anywhere – not just for your sultry look on the cover of this album, but for your warm and wonderful vocals throughout the set! The notes describe Barr as "vibrant, vivacious, vital, and full of volcanic tenderness too" – and given the presentation of the tunes here, we'd certainly find it hard to disagree. Kathy's got a great way with a torchy mellow tune, but shines even better on some of the more uptempo numbers – scored nicely by Jerry Fielding with a slightly jazzy undercurrent that really pushes the dynamic edge in Barr's vocals. Titles include "Love Is Here To Stay", "Cuddle Up A Little Closer", "How Long Has This Been Going On", "I'm Just Wild About Harry", "Bye Bye Blackbird", "Day In Day Out", and "Fine & Dandy".  © 1996-2021, Dusty Groove, Inc.
(Japanese pressing!)