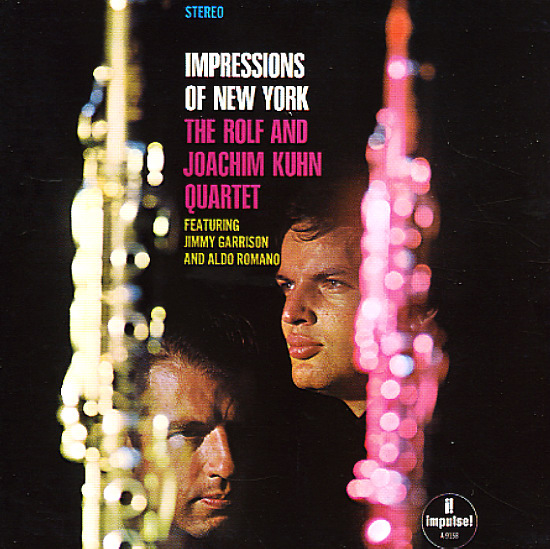 One of the most expressive albums ever from German jazzmen Rolf and Joachim Kuhn – an obscure American date cut for Impulse Records in the late 60s! This session pairs the Kuhn brothers – on clarinet and piano, respectively – with John Coltrane's bassist Jimmy Garrison and Italian drummer Aldo Romano – a really global mix of musicians, with sounds that definitely show that reach of talents! Unlike some of their other recordings, which at their most out explored some of the further reaches of modal playing, this is quite free, with an unrelenting momentum that never seems to lose steam even in the contemplative moments, probably inspired by the fever pitch the "New Thing" was generating on the New York scene in the mid 60s. The improvisations don't ever trade their intuitive sense for outright noise – and the two side long parts of the New York suite are divided into sections: "Arrival", "The Saddest Day", "Reality", and "Predictions".  © 1996-2020, Dusty Groove, Inc.
(Orange & black stereo pressing. Cover has a small cutout hole and a bit of gloss separation at the spine.)