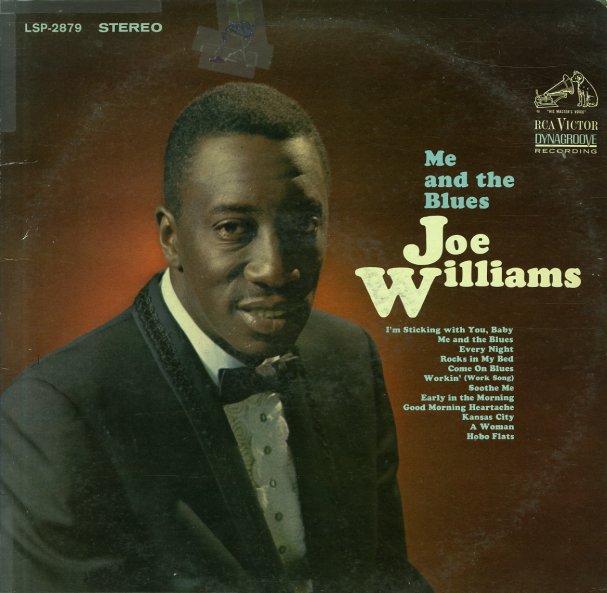 One of Joe's excellent albums from the 60s for RCA – set to backings from Jimmy Jones and Oliver Nelson, both of whom nicely update Joe's sound for the 60s! The tunes are mostly older numbers that recall Joe's earlier years, particularly those with Basie – but the arrangements are a bit fresher, and more 60s-swinging, which makes for a nice change of pace. Titles include "Me & The Blues", "Every Night", "Rocks In My Bed", "Workin", "Soothe Me", "Early In The Morning", and "A Woman".  © 1996-2021, Dusty Groove, Inc.
(Out of print.)

Greatest! – Count Basie Plays & Joe Williams Sings Standards
Verve, Late 50s. Used
CD...$6.99
An excellent album of vocals by the great Joe Williams! Joe's always been a fine singer, but with Basie, he really gets the backing he needs to do his work the best. And although this album isn't as authenico as it might be, it still comes from a time when Verve really knew how to handle singers ... CD

Bistro Ballads
RCA (Spain), 1955. Used
CD...$9.99
A wonderful album of sad-tinged saloon songs – sung by Chicago vocalist Audrey Morris, in the same small combo style she was using in the clubs at the time! Audrey accompanies herself on piano, backed by only the bass of Johnny Pate and drums of Charles Walton – in a lean style that ... CD

Maiden Voyage
Concord, 1998. Used
CD...$2.99
Features piano and arrangements from Michael Abene – and work from Joe Beck on guitar and Avishai Cohen on bass – plus guest piano from Herbie Hancock on a nice version of "Maiden Voyage". CD