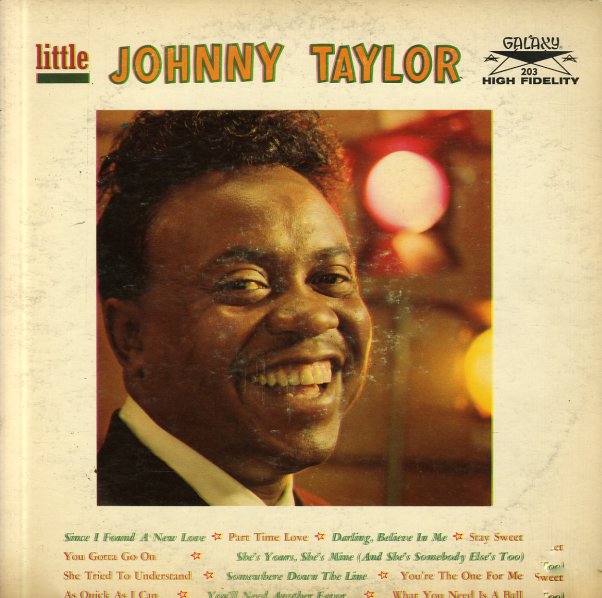 An excellent album of bluesy soul by Little Johnny Taylor – not to be confused with Johnnie Taylor, who later sang for Stax! This Johnny's got a style that's a bit bluesier, set up here in some nice larger arrangements that make the album feel like some of Bobby Blue Bland's best work for Duke back at the same time. Johnny's voice is incredible – much better than on his later records – and titles include "You're The One", "As Quick As I Can", "She Tried To Understand", "You Gotta Go On", "Part Time Love", and "Stay Sweet".  © 1996-2021, Dusty Groove, Inc.
(80s UK Ace Records pressing, but with a Japanese obi!)

Soul Full Of Blues – Little Johnny Talyor's Greatest Hits
Galaxy, 1968. Very Good
LP...$29.99
The title's a bit of a misnomer, given that Little Johnny Taylor wasn't the biggest hitmaker of the 60s – but the album's a killer batch of his best work for the Galaxy label – work that's definitely the "soul full of blues" promised in the title! The style here's a bit like ... LP, Vinyl record album

Purple Rain
Warner, 1984. Very Good+
LP...$39.99
One of the greatest crossover albums of the 80s – and the record that catapulted Prince very firmly into the mainstream! There's a tightness here that surpasses even that of Prince's early classics for Warner Brothers – an unabashed love of a pop hook that makes for some incredibly ... LP, Vinyl record album