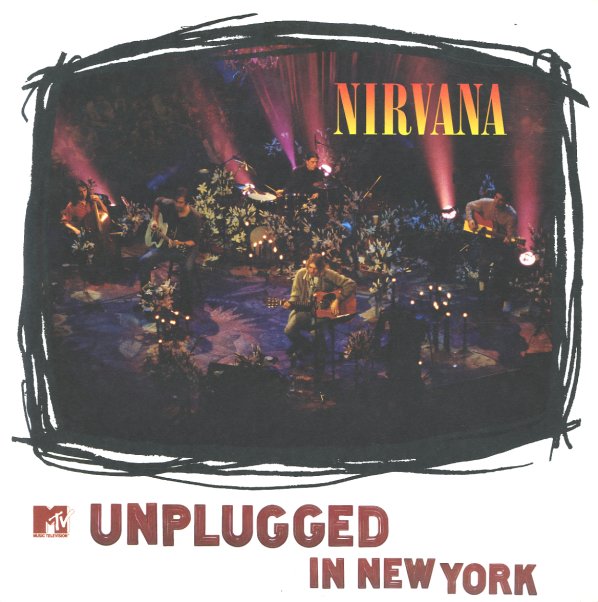 Nirvana's classic session for MTV's Unplugged – slowing down the tempo and stripping away the feedback and squalling electric guitars of their early 90s classics – as well as showing Kurt Cobain's command of cover tunes! This is a set that blew expectations right out of the water. It shows the essence of the great Cobain songwriting, as well has his gift for interpreting others – drawing parallels from Bowie, The Meat Puppets to traditional folk and blues. Amazing! Includes "About A Girl", "The Man Who Sold The World", "Where Did You Sleep Last Night", "Lake Of Fire", "All Apologies", "Dumb", "Polly" and more.  © 1996-2021, Dusty Groove, Inc.

In Utero (3CD+DVD Super Deluxe Edition)
DGC, 1993. Used 3CD & DVD
CD...$149.99
Nirvana's final album – one that's as poetic as it is heavy, and as beautiful as it is brutal! In Utero's legacy gets greater and greater over the years, not only because its mastermind extinguished himself not too long after it's release, but more than that, it's simply one of the greatest ... CD

Peepshow
Geffen, 1988. Used
CD...$4.99
A big one for Siouxsie and the group – from a time when they were both pushing forth the darker corners of mainstream pop, and making a few surprising turns for the dancefloor tune! Some of the upbeat moments here crossed over surprisingly well in the clubs at the time, but even those still ... CD

Peter Gabriel 4 – Security
Geffen, 1982. Used
CD...$3.99
A record that some might call the last truly great Peter Gabriel album – and a key cap to his excellent initial solo run! The album's got a deeper feel than before – slightly richer colors, more spiritual themes, and arguably more of a sense of majesty – almost an echo of some of ... CD