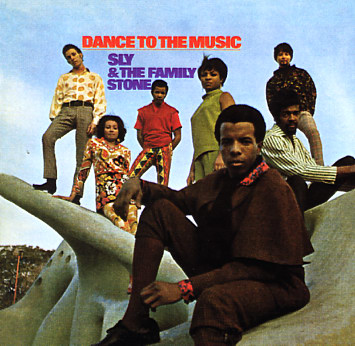 Dance To The Music (original cover)

Classic funkiness from Sly & The Family Stone – an album that really pushed them to the top of their game, and exploded on the late 60s scene like a righteous funky bomb! The title cut's a mega-hit that you'll recognize right away – but the whole album's great, and is filled with the simple, joyous energy that made Sly's groove one of the freshest of his generation – and which helped foist all the great work going on in the 60s underground firmly into the light of a much wider mainstream audience. The messages are subtle here, but the group are already doing their part to change the world bit by bit – and the funky rhythms at the bottom assure that they'll be doing it ass by ass on the dancefloor! Titles include "Dance to The Music", "Ride The Rhythm", "Higher", "Don't Burn Baby", and the 12 minute "Dance To The Medley", with the groovy "Music Lover" passage!  © 1996-2021, Dusty Groove, Inc.
(Mexican stereo pressing on CBS. Cover has some wear and aging, with small seam splits.)

You, Me & He
Epic, 1984. Very Good-
LP...$3.99
Proof that the move to soul was actually a great thing for James Mtume – because although the set's miles from his spiritual jazz work of the 70s, it more than makes up for that shift with a sophisticated approach to 80s soul! The group's a small one, with lots of keyboards from Mtume, and a ... LP, Vinyl record album

Too Hot To Handle
Epic, 1976. Near Mint-
LP...$24.99 (CD...$5.99)
A killer album of crossover soul from the mid 70s – one that dropped like a bomb when it hit, and gave this UK group a number of big hits in America! Keyboardist Rod Temperton wrote all the tracks on the album – and he's got keen talent for both funky numbers and ballads. If soul ... LP, Vinyl record album