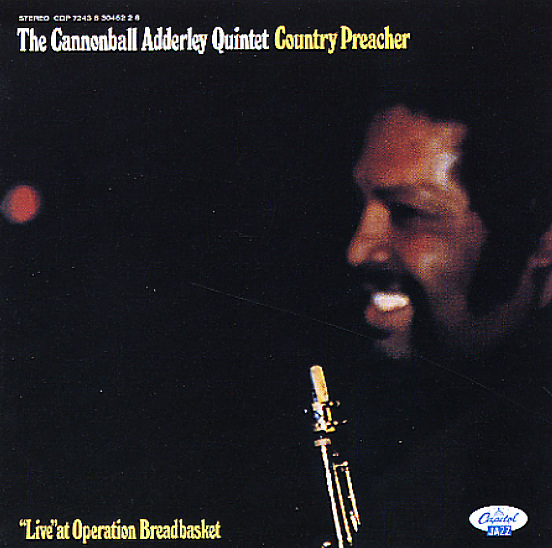 A totally great set by Cannonball Adderley – one of his funkiest albums ever, recorded live at Operation Breadbasket under the supervision of Jesse Jackson, and a session in which the band is cooking a lot more than on some of their other albums from the time! The set grooves hard with some tight electric piano from Joe Zawinul – amazing snakey lines that not only set the tone for the whole record, but which really make for a strong evolution from the Mercy Mercy Mercy era of the group a few years before. Cannon's alto and soprano work are beautiful – a masterpiece of soul jazz expression – as is the cornet from brother Nat – and the group's completed by bassist Walter Booker and drummer Roy McCurdy. The album's a bucketful of great jazzy sample tunes – and tracks include "Walk Tall", "Country Preacher", "Hummin", and the extended "Afro-Spanish Omlet".  © 1996-2021, Dusty Groove, Inc.
(Cover has some wrinkling and flaking along the opening.)