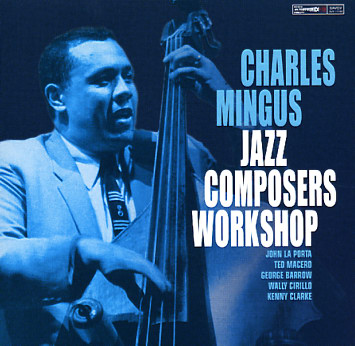 A classic session of modernist jazz – and some of Mingus most groundbreaking early work! The album was recorded for Savoy with 2 different groups – one's got Mingus leading John LaPorta on alto, Teo Macero on tenor, and Mal Waldron on piano, and the other group's a quartet with Macero, Kenny Clarke, and Wally Cirillo. The set marks a strong shift for Mingus – into tightly composed tracks that arc out in complex lines, hinting at the ferocity of later years – and it offers a showcase for a strong set of soloists carefully picked to match Mingus' rich vision. Titles include "Gregarian Chant", "Rose Geranium", "Purple Heart", "Transeason", "Smog L.A.", and "Level Seven". CD also features one bonus track not on the original LP – a previously unissued version of "Body & Soul" cut during the same sessions!  © 1996-2022, Dusty Groove, Inc.
(Out of print.)

Mingus At Carnegie Hall
Atlantic/Rhino, 1974. Used
CD...$4.99 (CD...$19.99)
Charles Mingus at Carnegie Hall – but playing here with relaxed and intimate feel that's not what you might expect from the staid setting! The album features 2 long tracks – both done in more of a jam session mode than any other Charles Mingus recordings we can think of. Both numbers ... CD

Music Written For Monterey 1965 Not Heard – Played In Its Entirety At UCLA
Mingus Music/Sunnyside, 1965. Used 2 CDs
CD...$18.99
A rare rare landmark from Charles Mingus – music written for the 1965 Monterey festival, but (as the title indicates) not played at the festival! The recording was done later, at UCLA, with a group that includes Charles McPherson, Julius Watkins, Jimmy Owens, Hobart Dotson, and Howard ... CD

Clown
Atlantic, 1957. Used
CD...$4.99
Stunning stuff – and one of the greatest Charles Mingus albums of all time – a true treasure recorded in that magical year of 1957, when Mingus was finally finding his strongest voice in modern music! The album's near-perfect from start to finish – as bold a statement in jazz as ... CD