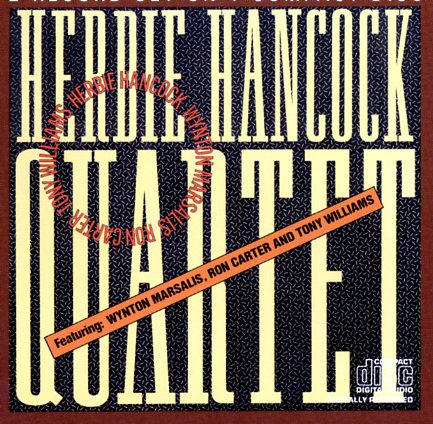 Acoustic magic from Herbie Hancock – proof that he wasn't only cutting electro records in the 80s! The set's got a fluid, open feel that's a bit like some of the VSOP Quintet work – although the group here is slightly different, with Hancock on acoustic piano, Ron Carter on bass, and Tony Williams on drums – plus a young Wynton Marsalis on trumpet – stepping in where Wayne Shorter and Freddie Hubbard left off. The tracks are somewhat sharp-edged and modern, but never in a way that's too outside – more just a continuation of the VSOP mode, with some of the Marsalis love of darker colors and tones. The double-length set has plenty of room for long solos – and titles include "Well You Needn't", "Round Midnight", "Clear Ways", "A Quick Sketch", "The Eye Of The Hurricane", "Parade", "The Sorcerer", "Pee Wee", and "I Fall In Love Too Easily".  © 1996-2021, Dusty Groove, Inc.
(Cover has minor flaking at the bottom left on front.)

Headhunters
Columbia, 1973. Very Good
LP...$39.99 (LP...$35.99)
A seminal jazz funk session of the 70s – Herbie Hancock's legendary meeting with The Headhunters, and a killer batch of tunes that really gave the combo their name! Herbie's playing a wide range of keys here – including Fender Rhodes, clavinet, and Arp – but almost even better is ... LP, Vinyl record album