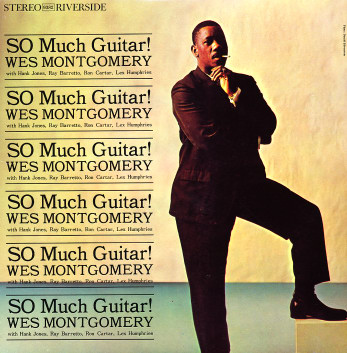 So much guitar – but never too much, given that Wes was the real master of sound and space, even at this early point in his career! The album's one that tries to break Montgomery from some of his smaller combo albums for Riverside, and pair him with a few bigger names – Hank Jones on piano, Ron Carter on bass, Lex Humphries on drums, and Ray Barretto on congas – who gives the album that bottom "kick" sort of groove that was used often on soul jazz sessions from the time. The tune's lope around leanly and cleanly, giving plenty of focus on Wes' work on guitar – and titles include "Twisted Blues", "Repetition", "Somethin' Like Bags", and "While We're Young", which is a solo track by Wes.  © 1996-2023, Dusty Groove, Inc.
(Out of print.)

Ray Bryant Trio (Prestige)
Prestige/OJC, 1957. Used
CD...$9.99
A great early trio session from Ray Bryant – the kind of record that instantly shows why he caught such fire on the scene! There's a simplicity here that's almost invisible – a command of the keys that's strong, but not nearly as show-offy as some of Bryant's contemporaries. And given ... CD