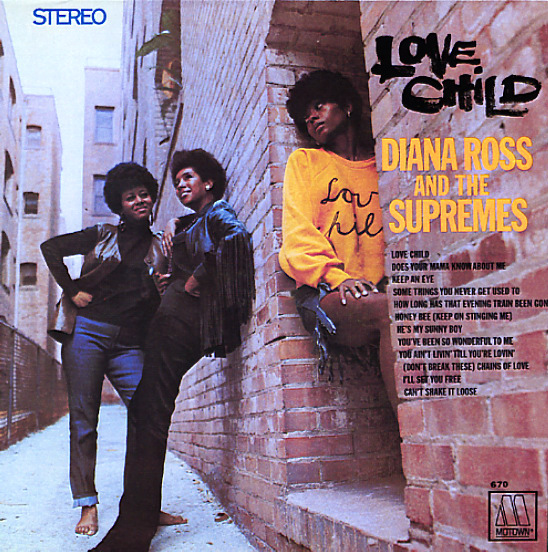 The album's got a slightly grittier image than most of the other 60s records by The Supremes – perfect for the title track, and its slight message of social commentary! The trio weren't heading into the same sort of territory as The Temptations or some of the other Norman Whitfield projects for Motown – but they were definitely evolving, with the young Cindy Birdsong in place of the departed Florence Ballard, making for a slight but nice shift in the trio's fantastic sense of soaring vocals! Titles include "You've Been So Wonderful To Me", "Love Child", "Keep An Eye", "How Long Has The Evening Train Been Gone", "Does Your Mama Know About Me" and "He's My Sunny Boy".  © 1996-2020, Dusty Groove, Inc.
(Cover has small splits in the bottom seam.)

Supremes Sing Country Western & Pop
Motown, 1965. Very Good
LP...$4.99
A strange twist for the girls – not really because the material's country, but because the tunes selected are the kind of country tunes that would often be done in kind of a deep soul mode. There's still a sparkling quality on the album – and the girls' approach to the tunes is less ... LP, Vinyl record album

Supremes Sing Rodgers & Hart
Motown, 1967. Very Good+
LP...$1.99
Classier than usual for the girls – as they move over to Broadway for a set of tracks penned by the Rodgers & Hart team, done up in a smooth Motown style that was probably designed to crossover, but which did so less than some of their straighter soul work. Still, even though the idea's ... LP, Vinyl record album

In The Pocket
Motown, 1981. Near Mint-
LP...$6.99
An album that definitely lives up to the title promised by The Commodores – a record that takes all their raw funky energy of the early years, and fuses it into a new groove that would catapult the sextet to superstardom! The sound is commercial, but still has a pretty fresh sort of feel too ... LP, Vinyl record album