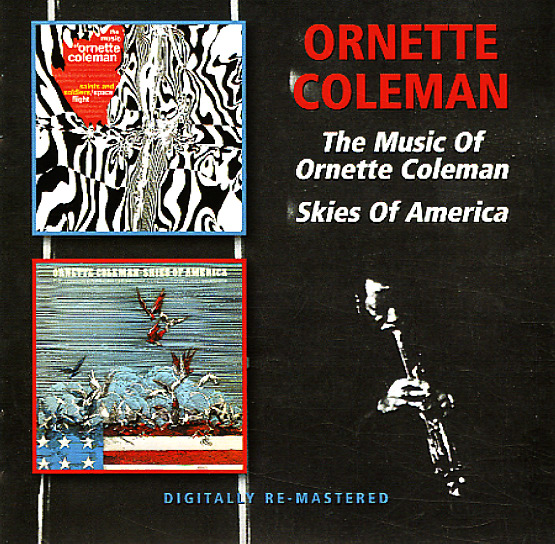 A great couple of harder-to-find Ornette Coleman records – nicely paired up in a 2CD set! First up is The Music Of Ornette Coleman, from 1967 – which is beautiful record that serves as both a showcase for Ornette's "serious" writing efforts – and his ability to play with a larger ensemble! It kicks off with Ornette playing trumpet solos with The Philadelphia Woodwind Quintet as they perform his "Forms & Sounds" live. That's followed by recordings of Ornette's "Space Flight" and "Saints & Soldiers" performed by The Chamber Symphony of Philadelphia Quartet, a string ensemble that brings a new light to Ornette's compositions! Skies Of America is an ambitious record with full orchestra, in a haunting sound that's light years from any of his smaller group recordings of the 60s and 70s! There's an incredible feel to the strings used here – played by the London Symphony Orchestra, conducted by David Measham – all tied up and dark, with swirling sounds that run up beautifully from the bottom, then take off to the skies promised in the title – opening the door for Ornette to come in and solo freely over the top – in a magical mix that easily makes the record a standout in his long and mighty career! Harmolodic theory is definitely a part of Coleman's conception here – but in very different ways than his quartet or quintet recordings. Lots of tracks on this one, including "Skies Of America", "The Men Who Live In The White House", "Sunday In America", "Dreams", "Native Americans", "Silver Screen", "The Artist In America" and more.  © 1996-2022, Dusty Groove, Inc.

All My Tomorrows/Soulful Strut/Breath Of Heaven
Columbia/BGO (UK), 1994/1996/1997. New Copy 3CDs
CD...$7.99 16.99
A trio of 90s albums from Grover Washington! All My Tomorrows is an overlooked gem from reedman Grover – recorded in his later years, but a set that's actually got more of an acoustic style overall – one that goes back to the roots farther than any of Grover's fusion records! ... CD

Symbiosis (Japanese paper sleeve edition – with bonus tracks)
Supraphon/Sony (Japan), 1974. New Copy
CD...$24.99
One of the hippest jazz groups going in Czechoslovakia during the 70s – the mighty Jazz Q, a cool fusion combo who really knew how to groove! The group's lineup includes a lot of electric keyboards and guitars – and while some tracks have them jamming out in a really rock-inspired way, ... CD