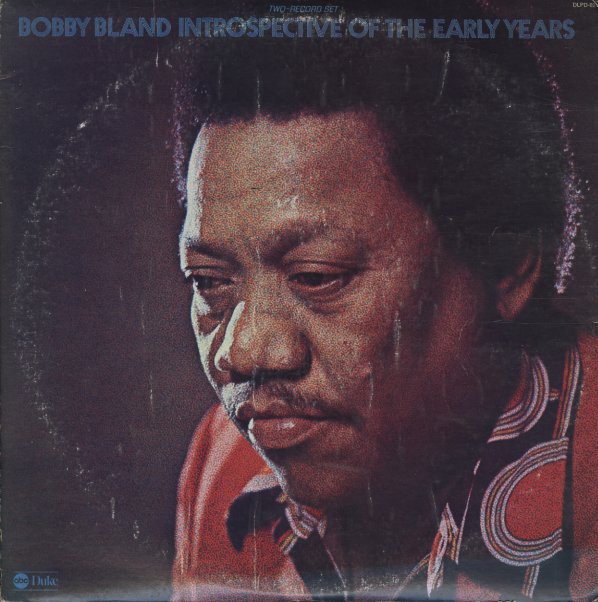 Introspective Of The Early Years

Not a retrospective, but an introspective – get it? Anyway, apart from the annoying title, the set's a great collection of Bobby's classic work from the 60s – 24 tracks pulled from his monumental years at Duke, a sublime blend of soul and blues, handled with a skill unmatched by no other singer! Titles include "Road Of Broken Hearted Ruin", "You're Worth It All", "Ask Me Bout Nothing", "Black Night", "If I Hadn't Called You Back", "That Did It", "Touch Of The Blues", "I Smell Trouble", and "Two Steps From The Blues".  © 1996-2022, Dusty Groove, Inc.
(Tan label MCA pressing.)

Sweet Vibrations
MCA, 1980. Sealed
LP...$1.99 9.99
Bobby Bland is one of those rare talents that never lost his groove, even as the years went on – maybe a bit like The Dells, in that he started out in the earliest days of soul music, but then was able to shift with the styles and the times, all without ever giving up the vocal strengths that ... LP, Vinyl record album

Call On Me/That's The Way Love Is
Duke, 1963. Very Good
LP...$11.99 (CD...$8.99)
One of Bobby Blue Bland's best albums ever – a stunning mix of blues and soul that's the kind of killer stuff that will make you a fan of his forever! There's no beating Bland at this point in his career – and the record is one of the finest illustrations of the power he brought to his ... LP, Vinyl record album

Two Steps From The Blues
Duke, 1961. Very Good+
LP...$11.99
An incredible record from Bobby Blue Bland – and quite possibly the greatest one he ever made! The set's got an amazing something special that's unlike most other material of the time – a bit blues, but a lot of soul too – still with some echoes of R&B in the jazzier charts ... LP, Vinyl record album

Spotlighting The Man
Duke, 1967. Near Mint-
LP...$14.99
Fantastic stuff, like all of Bobby's early Duke albums, and a breathtaking mix of soul and R&B, with some nice jazzy touches in the arrangements. Tracks include "Wouldn't You Rather Have Me", "Ask Me Nothin' About The Blues", "Gotta Get To Know You", and "You ... LP, Vinyl record album

Here's The Man!!! (2nd cover)
Duke, Mid 60s. Near Mint-
LP...$9.99 14.99
One of a handful of amazing early records from Bobby Blue Bland – genre-setting material that was partly blues, partly soul, and still had some of the fuller currents of the earlier R&B years too! Bobby's voice is incredible – one of the most distinct in soul, and up there with ... LP, Vinyl record album