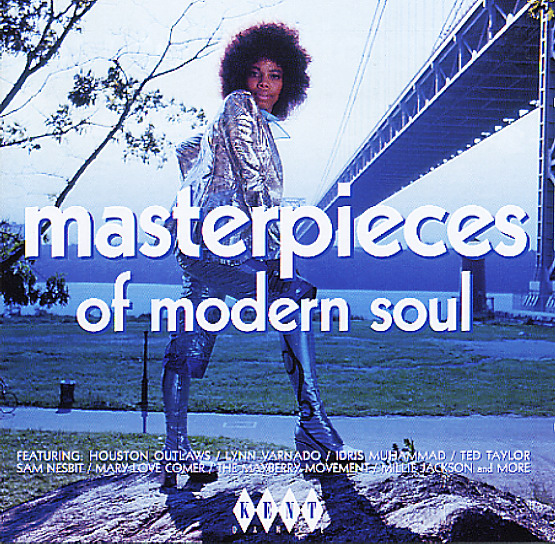 Also available
Various — Masterpieces Of Modern Soul ... CD 9.99
Ultra-hip soul from the 70s – a brilliant collection of underground tunes that represents some of the best of the decade's indie scene! The title says "modern", but the groove here is also pretty darn deep – as many of the tracks on the set have nice touches of southern soul, despite the smoother 70s production overall. Vocals are extremely heartfelt, and most tracks are in a mellow or midtempo pace – making for a really wonderful batch of tunes that moves away from the more uptempo and clubby sounds you might hear on other modern soul compilations. The set's a very unique take on the music, with a total of 22 tracks in all – most of them probably pretty new to your ears! Titles include "Ain't No Telling" by The Houston Outlaws, "Chase Those Clouds Away" by Sam Nesbit, "Fair Warning" by Ted Taylor, "I'm Me Just Me" by Gil Billingsley, "Come Through Me" by Garland Green, "I'm A Lonely Man" by Al Christian, "Bringin Me Back Home" by Lou Pride, "I Call It Love" by The Pretenders, "Second Hand Love" by Lynn Varnado, "Love Me Baby" by Tender Loving Care, and "What Can I Do, I'm In Love With You" by Jean Shy.  © 1996-2023, Dusty Groove, Inc.

In Perfect Harmony – Sweet Soul Groups 1968 to 1977
Kent (UK), Late 60s/1970s. Used
CD...$11.99
Magnificent stuff – an a treasure trove of lost harmony soul! This is the kind of compilation that really gets us going – 24 super-mellow soul tracks from the late 60s and early 70s, all of them done by male harmony groups with a stellar vocal approach. Some of the groups are ones you' ... CD

I'm A Loser – The Swamp Dogg Sessions & More
Kent (UK), 1969/1971. Used
CD...$8.99 (CD...$9.99)
Some of the greatest female soul from the southern scene at the start of the 70s – two monumental albums from singer Doris Duke, both produced by Swamp Dogg and packaged here with some rare bonus cuts too! Doris' work has always been some of our favorite from the deep soul scene – ... CD

Getting To Me – 25 Tracks From The Classy Atlantic End Of The Rare 60s Soul Spectrum
Kent (UK), 1960s. Used
CD...$7.99 (CD...$9.99)
Excellent rare soul from Atlantic – and a very different side of the label's output! The focus here is on tracks that are a bit more sophisticated than the hits – not really mellow, as most of the numbers are very nice groovers, but just with a twist that sets them apart from some of ... CD

King Northern Soul
Kent (UK), Late 60s. Used
CD...$12.99
Excellent rare soul from King Records – and almost none of it reissued since it was originally on 45s! King is more famously known as the home of James Brown during the 60s – but this set shows what a wealth of great work was going on at the label at the same time, and even though we've ... CD

More From The Other Side Of The Trax – Volt 45rpm Rarities 1960 to 1968
Kent (UK), Mid 60s. Used
CD...$8.99 (CD...$12.99)
Stax Records was so great at the start, the label kept on recording and releasing amazing music far past its familiar hits – so much so that the b-sides of their singles were often every bit as great as the better-played sides! This set looks at that huge legacy of music, and brings together ... CD

This P*ssy Belongs To Me – The Second Rudy Ray Moore Album
Kent/Traffic, Early 70s. Used
CD...$18.99
Rudy Ray Moore's second album, and almost hipper than the first – thanks to some key musical backings from The Fillmore St Soul Rebellion! The vibe here is as rough and raw as you'd expect – a no-holds-barred version of party records, with Rudy using plenty of language hardly heard ... CD

Sweet Sound Of Success
Kent (UK), Mid 60s. Used
CD...$9.99
Maybe not the sound of success – at least in terms of cash for the artists – but a stellar collection of 60s soul from the vaults of Wand and Scepter Records! Both imprints had some hits at the time, but also cut a huge amount of lesser-circulated tracks that are complete gems – ... CD

I'm Still In Love With You
Hi Records/Solid (Japan), 1972. Used
CD...$14.99
Warm wonderfulness from the great Al Green – a record that may have a pale-looking cover, but a set that's one of Green's most deeply soulful albums ever! There's a grace and a glow to the set right from the very first note – that really unique presentation and performance that makes ... CD

Let's Stay Together
Hi Records/Solid (Japan), 1972. Used
CD...$14.99
A damn great bit of work from the legendary Al Green – maybe one of his best records ever – and in fact, maybe one of greatest soul albums of all time! The set's got a style that's really genre-defining – not the previous southern soul of a few years before, but also not the ... CD