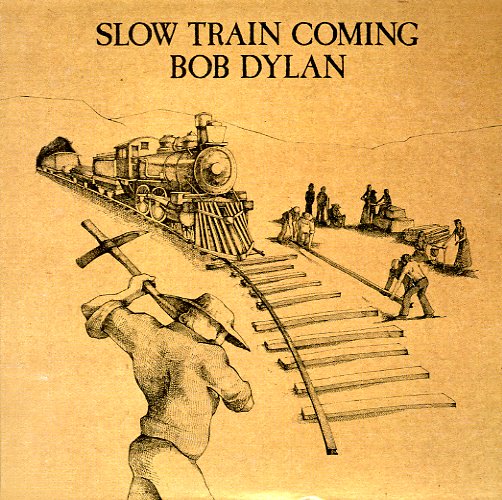 The first album in Dylan's so-called "Christian Period", but it's not really the uber-dramatic departure from the "old" Dylan that it was treated as at the time – gospel soul backing vocals and testifying lyricism for sure, but it sounds more like gospel has come to Dylan than it sounds like Dylan has "gone gospel". Slow Train Coming has a focused approach, ala Blood On The Tracks, even if this train doesn't come close to crossing over onto those particular tracks – and the return to a leaner, more focused vibe is welcome one. It's got stellar studio players in the mix, and producer Jerry Wexler's production touches on a soul sound, but smartly hews to Dylan's vocal style and lyrical focus. Dylan's high bar for a masterpiece given his trailblazing past didn't give this record or the following couple much a chance to succeed on their own merits back in the day, but all these years later...wow, this is really good, passionate stuff. Includes "Gotta Serve Somebody", "Precious Angel", "I Believe In You", "Slow Trait", "Gonna Change My Way Of Thinking", "Do Right To Me Baby (Do Unto Others)", "When You Gonna Wake Up", "Man Gave Name To All The Animals", "When He Returns".  © 1996-2022, Dusty Groove, Inc.
(Includes the printed inner sleeve. Cover has a small sticker spot and light fading on the spine.)

Seems Like A Freeze Out
Trade Mark Of Quality, Early 60s. Very Good+
LP...$39.99
Rare tracks from an assortment of sources – the Witmark demo, the 1964 Carnegie Hall concert, the 1962 Gil Turner tape, and a December 1965 session in LA with The Band! LP, Vinyl record album