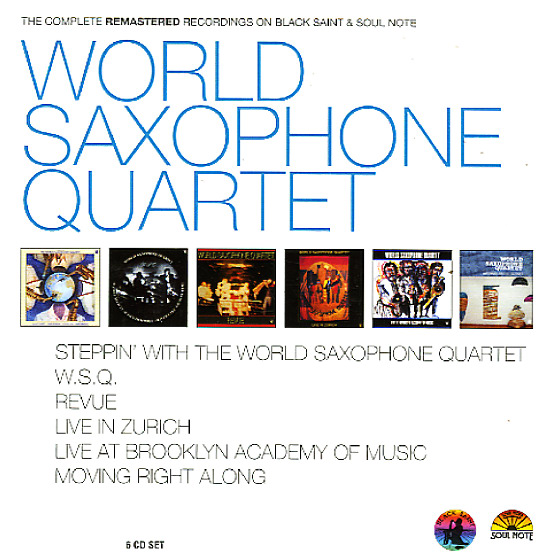 Genius work from the World Sax Quartet – a really unique ensemble who not only set the tone for a generation of jazz musicians to come, but also gave focus to some richly expressive talents from the 70s underground! The quartet is something of a supergroup right from the start – graced with tremendous reed work by David Murray, Julius Hemphill, Oliver Lake, and Hamiet Bluiett – all key American players who really helped transform the sound of jazz in the 70s – coming together here in a whole new way on seminal sides for the Black Saint/Soul Note label! The format – which inspired many others – is really compelling – as the group's sounds come only from saxes, no other instrumentation at all – with the four wind players handling all rhythm and melody, and making some really amazing music in the process. Horn interplay had never been heard so clearly before – especially as here, the stars put aside their egos, and never try to overblow each other – and instead have this brilliant way of working together to craft a new sort of groove. The box set features the albums Steppin With, WSQ, Revue, Live In Zurich, and Live At The Brooklyn Academy Of Music – all with the classic lineup – plus Moving Right Along, which actually features a quintet with Bluiett, Murray, and Lake – joined by James Spaulding and Eric Person.  © 1996-2021, Dusty Groove, Inc.
(All albums come in paper sleeve replicas of the original album covers!)

Complete Remastered Recordings On Black Saint/Soul Note Vol 3 (Interboogieology/Live At Sweet Basil 1 & 2/Children/Southern Bells/The Healers) (6CD set)
Black Saint (Italy), 1980s. New Copy 6CD
CD...$32.99 45.99
Music from a hugely productive period in the life of saxophonist David Murray – so much so that this is the third volume of his wonderful recordings for the Black Saint/Soul Note label – and there's no dip at all in the quality of the music! Murray was awash in new ideas at this time ... CD